Lessons from Far From the Madding Crowd

They spoke very little of their mutual feelings; pretty phrases and warm expressions being probably unnecessary between such tried friends.  Theirs was that substantial affections which arises (if any arises at all) when two who are thrown together begin first by knowing the rougher sides of each other’s character, and not the best till further on, the romance growing up in the interstices of a mass of hard prosaic reality.

When I was in college, I read a book about dating and courtship.  It had a graph in it, depicting the various intimacies a man and woman can develop: physical, emotional, and spiritual.  The author made the point that the physical element of a relationship is the easiest and fastest to grow; the other two require more time and effort.  Yet, when a man and woman focus on the physical piece, to the exclusion of emotional and spiritual intimacy, it won’t be enough to really sustain and foster a true relationship.

I think Thomas Hardy, author of Far From the Madding Crowd, would agree.  He states that passion, without the foundation of mutual friendship forged through shared difficulties, “is effervescent as steam.”

Written in 1874, Far From the Madding Crowd is Hardy’s fourth novel and first major success.  The title is based on a poem called “Elegy Written in a Country Churchyard,” which Thomas Gray penned in 1751.  It reads:

Along the cool sequester’d vale of life

They kept the noiseless tenor of their way.

The adjective “madding” here means “frenzied” or “raging.”  Gray asserts that the countryside, in contrast, offers a peaceful refuge, where life is calm and unaffected.  Hardy sets his novel in the fictional location of Wessex, in rural southwest England.  The main location is a farm and many characters are at work shearing sheep, going to the corn market, or gathering crops.  These scenic pastoral visions may call to mind the idyllic conditions of country life.  ' 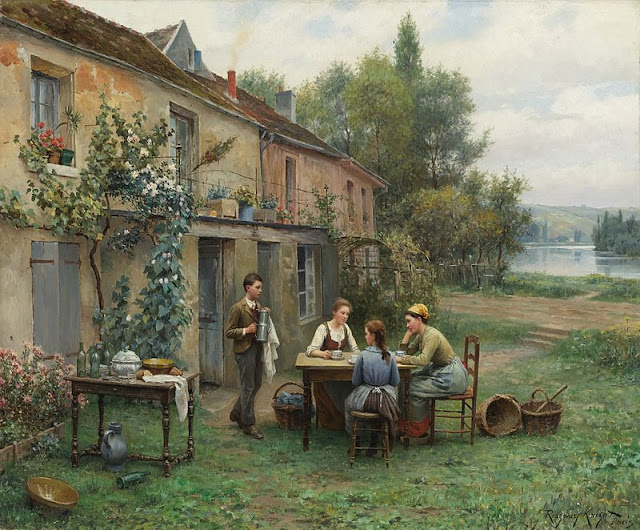 However, Hardy employs this line as his title in a stroke of literary irony.  The characters in his novel are “madding.”  His Wessex is far from calm: rumors, gossip, and scandals abound.  Even nature becomes a tempest, between destructive fires, thunderstorms, and even sheep that rush headlong to their deaths, destroying one farmer’s livelihood.

The flurry centers around the female protagonist and her three potential suitors.  Hardy gives his characters incredibly rich, symbolic names that provide the reader with insight into their natures.

Let’s start with the protagonist: Bathsheba Everdeen.  When we first meet her, Bathsheba is looking at herself in a mirror, a strong reflection of her proud nature.  She treasures her independence, at one point declaring that she has no intention of marrying anyone.  When she inherits a farm from her uncle, Bathsheba insists on managing the affairs herself, an extraordinary move for a woman in Victorian England.

The word “Everdeen” looks much like “evergreen,” a plant that remains green throughout the growing seasons, even the most rugged ones.  Bathsheba experiences both highs and lows in her dating life, but she never seems to lose her appeal.  Merriam-Webster further defines “evergreen” as “retaining freshness or interest: perennial,” and “universally and continually relevant: not limited in applicability to a particular event or date.”  Hardy’s Bathsheba has lessons for readers today, not just for his audience in the late 1900s.

Interestingly, Suzanne Collins, bestselling author of The Hunger Games trilogy, chose to name her protagonist Katniss Everdeen, a nod to Bathsheba Everdeen, in recognition of Bathsheba’s proud, independent spirit (and maybe her knack for getting entangled in multiple romantic interests).

A final note on Bathsheba’s name: oaks are considered a kind of evergreen.  This becomes interesting, as Bathsheba’s first suitor is named Gabriel Oak, to whom I will now turn.  Gabriel and Bathsheba are closely related throughout the narrative, and not just by the similar symbolism in their names.  Bathsheba intrigues him immediately.  While both are working in the fields caring for sheep and cow respectively, they become acquainted and Bathsheba actually saves Gabriel’s life.  Shortly after, he asks for her hand in marriage, which she refuses.

Their paths intersect again later on, though under very different circumstances.  Bathsheba has risen in society, due to her inheritance of her uncle’s farm.  Meanwhile, Gabriel has suffered a terrible financial loss and ends up working for Bathsheba.

The name “Gabriel”—reminiscent of the New Testament angel—means “God is my strength.”  Many times Gabriel comes to Bathsheba’s rescue, like a kind of providential angel in her life.  Indeed, Gabriel possesses a quiet, humble, inward strength that guides him throughout the novel.  He is a shepherd, a protective guardian who disinterestedly advises Bathsheba, even in her romantic interests, always desiring her good.  The oak tree is known for its very strong and hard wood, a symbol of Gabriel’s strength and virtue, as well as his enduring love for Bathsheba.

One day, acting on an impulse, Bathsheba decides to send a valentine to a neighboring farmer named Boldwood.  Her pride is wounded by him because she is the sole woman present at the corn market and, while the other men are captivated by her presence, Boldwood seems completely indifferent to her.  Bathsheba teases him by sending a valentine with the words, “Marry me.”

What does Boldwood’s name tell us about his character?  The woods are typically filled with plenty: numerous trees, vegetation, and animals.  Similarly, Boldwood is an affluent farmer—the most sought-after bachelor.  But, like the woods where the trees are so numerous they become almost anonymous, nothing about Boldwood himself really stands out as special and attractive.  He isn’t really singular: nothing specifically about him really attracts Bathsheba, aside from his original indifference to her.  He is actually very replaceable.  His name also might reflect that, when Bathsheba first spies him at the corn market, he seems wooden—unmoved by her beauty.

This markedly changes, however, once Boldwood receives her valentine and traces its sender to Bathsheba.  He is far from interpreting it as a jest; instead, Bathsheba’s flirting has spawned him from a quiet, taciturn, emotionless bachelor into a courter emboldened in declaring his complete infatuation for her.  Bathsheba finds herself in a quandary, responsible for drawing this man into passionate feelings for her, yet simultaneously not feeling an iota of passion toward him.

She said in the same breath that it would be ungenerous not to marry Boldwood, and that she couldn’t do it to save her life.

Bathsheba’s third and final suitor is named Sergeant Francis “Frank” Troy.  The city of Troy, of course, was the setting of the Trojan War, featured in Homer’s Iliad and Odyssey.  It was a war of destruction over a woman, foreshadowing the projection of Troy’s feelings toward Bathsheba.  This military connotation of Troy’s name is also reflective of his position as sergeant.  As for his first name, “Frank” is someone who is literally frank.  He wears his heart on his sleeve: he is blunt to the point of rudeness and romantic to the point of indiscretion.

And Troy’s deformities lay deep down from a woman’s vision, whilst his embellishments were upon the very surface; thus contrasting with homely Oak, whose defects were patent to the blindest, and whose virtues were as metals in a mine.

Bathsheba meets Troy in a very unexpected manner.  She is walking alone through the woods one evening and becomes  literally entangled with Troy, as her dress becomes caught in his coat button.  It is a very symbolic representation of their relationship: she becomes caught in her physical attraction to him, despite the impropriety or imprudence of it.  In fact, Bathsheba lays her independence at his feet, once so highly cherished, just in desperation to be with him.

Bathsheba loved Troy in the way that only self-reliant women love when they abandon their self-reliance.  When a strong woman recklessly throws away her strength she is worse than a weak woman who has never felt any strength to throw away.

If this were the “Dating Game,” I think it would be fairly obvious which one of these bachelors—Oak, Boldwood, or Troy—is the winning match for Bathsheba.  Oak stands out as the man with the best virtues, who proves his genuine love for Bathsheba through selfless action and enduring friendship, which involves charitably correcting her for her wrongdoing.  But of course, Oak is not the man Bathsheba initially chooses.

Isn’t that a dynamic that happens over and over again though—maybe in your own life, or that of a family member or friend?  The man who would make the best husband is passed over for the attractive, enticing, romantic man.  What should seem so clear becomes muddled.  This is because, ever since the Fall of Man, our reason is not always in control.  Instead, our passions like to take over.  Without the reins of reason guiding us, passion is like a runaway horse, blind to prudence and decorum.  It runs the danger of being a headlong flight into destruction.

This is why, in a budding relationship between man and woman, it is wisest to focus on emotional and spiritual intimacy first, reserving physical intimacy only for much later.  With the clear sighted vision of reason, one can objectively observe a potential suitor, weighing his strength of character and virtue—essential qualities of any spouse.  A genuine friendship can blossom, one where both man and woman appreciate the other’s talents, as well as acknowledging their respective flaws (we all have them!).  Yet, in a physically-centered relationship, possession and obsession dominate, glossing over any defects in an effort to glorify the object of desire.

Though we live in a different world from that of Thomas Hardy, today we often find ourselves in a “madding crowd.”  May the true compass of reason guide us, particularly those like Bathsheba who are seeking someone to love.

Posted by Cassandra at 2:25 PM