Lessons from Pride and Prejudice

Why did I marry my husband?

To quickly clarify, I pose the above question not in a spirit of exasperation, questioning the very fact that he and I entered into matrimony in the first place.  Quite the contrary!  Every day provides me additional reasons to confirm and strengthen my conviction that he is exactly the man to whom I want and need to be married.

So, why the inquiry?

I just finished reading Pride and Prejudice, by the renowned Jane Austen.  I hesitate to even venture writing this post because 1) it frankly embarrasses me that it took me until this point to actually read such a world-renowned, classical novel and 2) considering the breadth of analysis, critique, and research compiled on this famous narrative, what I could add seems barely adequate: what in heaven's name can I contribute?

But in any case, here I am and I will go ahead and give my humble perspective!

A plot synopsis seems hardly necessary since the story is so well-known and, should you find yourself ignorant of it, well--I just urge you to find the nearest copy and begin reading!  Thus, I'll jump right into my reflections. 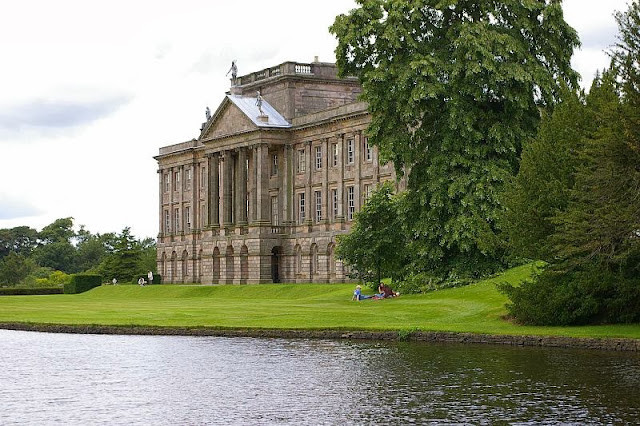 Clearly, marriage is the matter of the hour in Pride and Prejudice.  Who desires marriage?  Who has the best prospects?  What's the most advantageous marriage?  As Austen's famous opening line reads:

It is a truth universally acknowledged that a single man in possession of a good fortune must be in want of a wife.


For a single young woman, especially one without a male sibling and whose father's estate would pass to another relative, marriage was the safest and most secure means of ensuring that one's material needs were to be met.  Thus for the Bennett sisters, the possibility of not marrying meant a real possibility of one day living in destitution.

Ironically, today we face the exact opposite dilemma: many couples find that marrying would actually be financially disadvantageous!  How times have changed!

Then: marriage was the focus, the goal, the most important decision a young woman could make.  Now: what does marriage mean to today's young women?

Today, marriage rates are dropping.  Women--when they do marry--do so at a later age.  Thankfully, today's females don't have to rely on marriage to pull them out of possible impoverishment.  They have education and careers & excel in their fields.

But I do wonder...as much as young girls are encouraged and driven to build careers and move up professional ladders, is not the desire to marry still lying deep in their hearts?

I can't, of course, speak on behalf of my female peers, but, from personal experience, I did desire to advance in my education and career & took concrete steps to do so.  Yet, there was an ever-present yearning much more deeply rooted within me.  Ever since I was a little girl, I would dream of my wedding day and entering into a new life with my husband.  It was the very thing I hoped and prayed for the most--degrees and a career couldn't hold a torch to marriage.

It intrigues me whether this desire to marry is still foremost in the hearts of most of today's young women, even though, societally, it's not as clearly dominant and pervasive a concern as it was in 19th century England.  I'm sure a sociologist would be able to provide the statistics!

In any event, marriage was in the forefront for the characters in Pride and Prejudice.  But what was the motivation?  Economics played a part, of course, but not exclusively.  When Mr. Collins offered Elizabeth his hand and, accordingly, a stable, secure future, Elizabeth adamantly would have nothing to do with it and was unhappy to hear her close friend, Charlotte, agreed to become his wife.

She had always felt that Charlotte's opinion of matrimony was not exactly like her own, but she had not supposed it to be possible that, when called into action, she would have sacrificed every better feeling to worldly advantage. Charlotte the wife of Mr. Collins was a most humiliating picture! And to the pang of a friend disgracing herself and sunk in her esteem, was added the distressing conviction that it was impossible for that friend to be tolerably happy in the lot she had chosen.

In the myriad of relationships and marriages present in the novel, there are so many motivations at play: shame, passion, reason, pragmatism, love.  And depending on which factor was most dominate, one can safely presume to say which marriage would then enjoy the greatest degree of peacefulness, respect, and charity.

So I return again to my opening question: what was my motivation for marrying my husband?  I was obviously very much in love with him and was attracted to him--motivations of the heart.

I also reasoned that he was intelligent, with a great education and quite capable--indications he would be a steady breadwinner for our future family.  Economics was definitely at play for me, just it was for the Bennet family.  I was wary of entering into marriage with someone who was burdened with massive debts and who additionally lacked a strong potential career (thus, for me, a scenario like debt from medical school could be rationalized, but debt without a promising career path would be a major obstacle).

Marriage is about love and passion, yes, but it's also very sensible and pragmatic: it's about creating and raising a family together, which requires certain stability and financial security.

But more than any of these heart or head motivations was a spiritual motivation: the conviction that he, more than anyone else I had ever met, would help me become the person I am meant to be.  Beyond his physical or mental features, I was attracted to his soul and knew that he would be the best person to help me reach my ultimate destination, which is heaven.  I, for my part, wanted to do my very best to help him reach heaven, too.

When doing some research on this novel, I came across various reviews or comments from female readers concerning the book, which went along the lines of, "I wish I could meet my Mr. Darcy!"  Enter in swoons and romantic pining.

But perhaps this isn't the best interpretation of the character.  While ultimately putting aside his pride and acting chivalrously & selflessly toward Elizabeth, the relationship between these two characters isn't a fairy-tale romance.  Mr. Darcy isn't Prince Charming; Elizabeth isn't a princess.  Love is present, clearly, but it's a love that chisels away at their respective faults--in other words, it's a love that makes them each better people.  It's a love that purifies, corrects, and grows slowly over time.  True love doesn't lead just to sunsets and roses...it leads to virtue.

She began now to comprehend that he was exactly the man who, in disposition and talents, would most suit her.  His understanding and temper, though unlike her own, would have answered all her wishes.  It was a union that must have been to the advantage of both--by her ease and liveliness, his mind might have been softened, his manners improved; and from his judgment, information, and knowledge of the world, she must have received benefit of greater importance.

As Darcy says to Elizabeth,

As a child, I was taught what was right, but I was not taught to correct my temper.  I was given good principles, but left to follow them in pride and conceit...Such I was from eight to eight and twenty; and such I might still have been but for you, dearest, loveliest Elizabeth!  What do I not owe you!  You taught me a lesson, hard indeed at first, but most advantageous.  By you I was properly humbled.

To care so much about the other person to desire to change and improve...to become more worthy of him or her: that's romantic!  Love, slowly and steadily, spurns the character growth of these two individuals and then--by removing their respective pride and prejudice--forms the foundation of respect and honesty on which they can build their marriage.

I have one final reflection to add concerning Pride and Prejudice, one which fans can become quite impassioned about!  My first introduction to P & P was the 1995 BBC television series, followed by the more recent movie version in 2005.  Only after watching both of those did I read the book.  And I regret that. 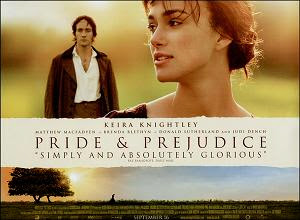 One of the most refreshing and powerful aspects of reading a fictional novel is the gift of imagination: to create in your mind the appearance of the characters, the scenery the author describes, the expression and tone of the dialogue.  In reading Pride and Prejudice, I couldn't help but see Keira Knightley's face when I envisioned Elizabeth!  Surely, she has a very pretty face, but it's not exactly as much fun as when you can imagine a character for yourself...

In general, I much prefer reading a book first.  The movie versions of Pride and Prejudice certainly colored the novel for me and understandably removed any element of surprise!

Simultaneously though, I don't recommend not watching the movie versions of Pride and Prejudice.  They're great!  While the BBC version is certainly more faithful to Austen's writing, I must admit that I prefer the 2005 movie adaptation.  The aesthetic dimension of the music (seriously, just listen to the soundtrack...so beautiful!) and the powerful shots of the natural scenery are incredibly moving.

Since 19th century England is a bit removed from our time, it was indeed helpful and beautiful to actually see what a typical dance at one of the eventful balls would have been like, or to visualize the dresses or elaborate homes of the wealthy.

But again, take my advice: read the book first!

Posted by Cassandra at 4:10 PM No comments: