...despite her placid habit of life and her decisive manner, she was troubled always with the suspicion that there was still something to be sought which she had not yet found...

I was having a conversation with an agnostic who was grappling with understanding God and what seemed to be God's injustice. He proposed a hypothetical situation to me: a soldier on a battlefield who moves to cover an opening and promptly dies from gunfire. Meanwhile a nearby soldier survives and goes on to live a long, prosperous, happy life after the war.

The first soldier who died--what was the purpose of his life? Did God create him merely for the explicit purpose of filling a hole on the battlefield? If so, where is the justice in that? Why should one man die and another live? That soldier didn't win the war or go on to become president or create a new invention. He lived for the reason of ... filling a hole? How could that be just? How could a good God do that?

This conversation took place more than ten years ago and I have never forgotten it, probably because I carry a degree of regret about it. I didn't have an answer or explanation. I didn't know what to say. From the inquirer's perspective, I could completely see his point. It didn't seem fair. Why create someone who would die with such a meaningless purpose?

This memory can to me unexpectedly while reading Evelyn Waugh's Helena. Waugh lauded it his favorite work. A hagiography, Helena reads very differently from the other Waugh novel I have read, Brideshead Revisited.

The book follows Helena's life from her childhood as a British king's daughter (based on an unlikely legend), her marriage to Constantius Chlorus, the birth of their son Constantine, years spent alone after she was divorced, to her time as Empress Dowager when Constantine ruled.

Helena spends her life surrounded by those who wield great power and influence. Her husband and son seek to rule the empire. In earthly terms, there was no higher aspiration.


His need was simple; not today, not tomorrow, but soon, sometime before he grew too old to make proper use of it, Constantius wanted the World.

Yet despite the laud and fanfare, Helena knows better than anyone the consequences and implications of such power. Members of the royal family are murdered for fear of conspiracy or challenge. Helena even learns that Constantine has approved of the murder of Crispus, his son and her grandson.

The problem, as Waugh explains through the observant voice of Helena, is power without grace.

One might assert that God gave these leaders a higher calling in life, a more significant purpose, than others. But is such an assertion true? It was certainly a harder path to tread. Waugh is critical of Constantine, but sympathetic as well. Constantine is no Nero--though often failing, his intentions seem to be noble.

Helena, in a particularly profound prayer to the Magi, intercedes for her son and those who are powerful in the world, since such authority can pose a substantial obstacle to sanctity.


"For His sake who did not reject your curious gifts, pray always for all the learned, the oblique, the delicate. Let them not be quite forgotten at the Throne of God when the simple come into their kingdom."

And what of Helena? What of her purpose?

It was realized in the very twilight years of her life when Helena traveled to the Holy Land in search of Christ's cross. When the pieces of wood were excavated from the ground and venerated as the holy cross on which mankind was redeemed, Helena's purpose was finally fulfilled.


No one who watched that day, while the Empress calmly divided her treasure, could have discerned her joy. Her work was finished. She had done what only the saints succeed in doing; what indeed constitutes their patent of sanctity. She had completely conformed to the will of God. Others a few years back had done their duty gloriously in the arena. Hers was a gentler task, merely to gather wood. That was the particular, humble purpose for which she had been created. And now it was done. So with her precious cargo she sailed joyfully away.

Helena's purpose was actually the purpose of all of us: to do the will of God. Therein lies the explanation to the hypothetical situation that introduced this post. It came to me suddenly as I read Waugh's writing.

The question isn't whether the soldier had a long life, a happy life, a life with all the possibilities and adventures another may enjoy. It centers on the question: was the soldier doing what God desired him to do?

If the answer is yes, then filling the hole and sacrificing his life on the battlefield is precisely the greatest thing that that soldier could do.

The value and purpose of one's life is not determined by earthly standards. If such were the case, Constantius Chlorus--ruler of the great Roman Empire--would be honored and recalled with more respect and adulation than his wife, who found some pieces of wood.  Instead, his wife is venerated around the world as St. Helena. 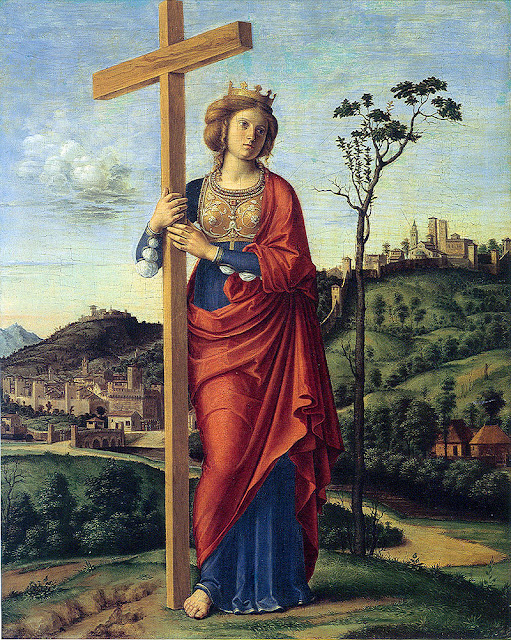 "I want to do what God wants." It should be the desire that directs our lives. Helena became a saint by doing what God desired. That is our purpose, too, and though it may differ in how it is individually lived out--as a world leader, a finder of wood, a soldier who fills a hole--the end result is identically perfect and eternal: heavenly triumph.
Posted by Cassandra at 4:45 PM No comments: