A family had just moved into a new home, which they were renting, when they quickly noticed some strange things.  There were noises in the night.  Inexplicable shadows appeared on the wall, but there was no light to cast them.  The family became so disturbed that finally, one night, the father got everyone in the car and started to drive away.  They were only in the driveway when the father suddenly got a call on his cell phone.  It was from the house number though no one was in the house.  He picked it up and heard, “Come back here.”Sounds like something from a movie, but instead I heard this story (based on a real event) in a homily, given by a Catholic priest on the first Sunday of Lent.  Have you ever noticed that this Sunday’s Gospel (the First Sunday of Lent) is the same every single year? We always hear about Christ’s temptation in the desert as we begin the Lenten season.  And in that Gospel passage, we hear about the devil. 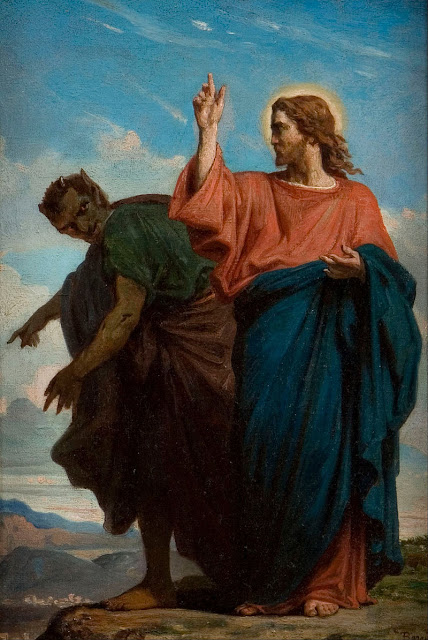 We are beginning our 40 days of prayer, fasting, and almsgiving.  We will inevitably face temptation during this time: maybe to abandon our good resolutions, to compromise, or to feel defeated and discouraged if we stumble.  Sometimes we yield to temptation out of laziness, love of pleasure, comfort-seeking, and other vices. But sometimes the temptation to deviate from our good Lenten resolutions comes from a source outside of ourselves.Whether we are always aware of it or not, we are all engaged in a battle.  We are in spiritual combat right now and there is an Enemy. One of the most important strategies of warfare is to know your opponent.  How well do you know yours? I don’t mean to scare you, but the Enemy certainly knows you.He goes by many names: Satan, the devil, the serpent, the dragon, the accuser, the evil one, Lucifer.  But who is he? The devil is a fallen angel. Lucifer (meaning “light bearer”) was the highest of all the angels that God created.  However, he abused his freedom, choosing to disobey God. His “Non serviam!” (“I will not serve!) was the ultimate act of pride.  Milton in his Paradise Lost has Satan sneer, “Better to reign in Hell than serve in Heaven.”After his rebellion, Satan was cast out of heaven.  This was the first act of evil: evil was a historical event.  As we read in the book of Revelation 12:7-9:

“Then war broke out in heaven; Michael and his angels battled against the dragon. The dragon and its angels fought back, but they did not prevail and there was no longer any place for them in heaven. The huge dragon, the ancient serpent, who is called the Devil and Satan, who deceived the whole world, was thrown down to earth, and its angels were thrown down with it.”
As an angel, the devil has no natural body.  He is pure intellect. Unlike our minds, which are always acquiring new information and making connections, angels know fully and completely.  This is why, when the devil disobeyed God, it was a permanent choice with no possibility for repentance. Saint Thomas Aquinas writes, “Hence it is commonly said that while a man’s free will is able to alternate between contraries both and after a choice, an angel’s is able to so alternate only before choice.”  When an angel wills something, it does so entirely with full knowledge of its decision and so the devil will always be evil.
The devil now roams about the earth, “looking for someone to devour” (1 Peter 5:8).  He actively works to lead souls away from God. That is what he did with Adam and Eve.  You’ve probably heard the saying that “the devil made me do it.” It’s a misleading notion, though.  God has gifted us with free will. We are responsible for our own decisions. The key, however, is that—when we are making those decisions—the devil is actively persuading us to choose the lesser good … in other words, to choose evil.  This is the devil’s whole agenda.
What can we do to protect ourselves from this Enemy?  Here are some suggestions.
Our Lord is with us as we begin this Lent.  He has fought the battle and won! He will help us in our fight, too.  When Lent is over and Easter Sunday has arrived, we will once again renew our Baptismal promises, which begin with rejecting Satan, his works, and his empty promises.   We need to know our enemy, but we need not fear. As St. Teresa of Avila reminds us in her Autobiography:
“If this Lord is powerful, as I see that He is and if the devils are His slaves … what evil can they do to me since I am a servant of this Lord and King?  Why shouldn’t I have the fortitude to engage in combat with all of hell?”
Posted by Cassandra at 11:14 AM No comments:

I'm searching for signs.  Or maybe the signs are coming to me and I'm just trying to interpret them.

Last spring a mother and father cardinal built a nest right outside our kitchen window.  We were front-row spectators as mother cardinal sat, day after day, warming her three eggs.  I could empathize with her, since I was in the last trimester of my pregnancy.  We were both waiting, together, for our babies to come.

We watched father cardinal bring her food.  And then, we saw the miracle of new life before our eyes: three tiny baby cardinals, hardly distinguishable one from the other as they lay huddled together at the bottom of the nest.  We watched their feathers become puffy and then sleek.  We saw their mouths greedily open, vying for food from their diligent parents.  And then we saw the babies take their precarious first flights, half flying, half falling from branch to branch.

It could have been any bird, but why cardinals?  Was it happenstance?  Or God's design that in His providence He knew I would look back on this small event and find comfort?

My memory works in strange ways.  I can't always remember what I ate for dinner yesterday, but I remember some of the events of summer 2019 with astonishing clarity.  I remember a walk I took in our neighborhood one July evening.  It was still hot outside and I was walking because my due date was just days away and I wanted to encourage our baby boy to be on his way.

I'll never forget that walk because I was talking to my brother, Michael.  He was in the hospital--not an unusual occurrence for him, unfortunately.  But this time was different because now it was terminal, though neither of us knew it at the moment.  He asked me what I made for dinner, which was his daily question for me.  He was telling me all the news about family members, aunts and uncles and cousins.  He told me that our Dad's birthday was coming up and, once he was out of the hospital, he wanted to go to TJ Maxx and buy our Dad a present.  He was talking about all the simple and beautiful things Michael always talked about--things of little and immense significance at the same time ... the small things that really matter, not grudges or resentments or criticisms, but things like the sun coming out from behind the clouds.

I drive on that road now and think about that summer evening.  It looks different covered in snow, with trees bare of leaves.  Summer will come again, but that conversation will not.

God sent His Word into the world and that Word is enough for me.  I have faith in that Word.  "I am the way, the truth, and the life."  I don't need more than that.  But maybe God sends signs anyway.

After Michael died, we met with our funeral direction, a devote Catholic, neighbor, and fellow parishioner who knew Michael since he was a little boy.  She told us that we might see signs from heaven, little things that are Michael's way of telling us that he is okay.  She mentioned cardinals, who have had a history of that sort of thing.

This morning at breakfast a cardinal appeared outside, right near the nest they had built last year.  I jumped out of my chair, breathless at the sight.  Was it a sign?  A message from Michael?  I cleared away the breakfast dishes.  I didn't need signs, though.  And it was probably just a bird, flying around on a snowy winter morning.

But then our youngest daughter called out, "There's two red birds!"  She was the apple of Michael's eye.  And sure enough, high in the trees were two brilliant red cardinals, flying from branch to branch together.