A Winning Approach to Defending the Catholic Faith

My acquaintance, a Protestant, proceeded to hand me a paper, peppered with Scriptural citations, explaining the major theological errors with Catholicism. I hardly knew how to respond. I desperately needed a toolbox: a go-to guide to help me formulate a Catholic defense to these arguments.

Blue Collar Apologetics is that toolbox and its author, John Martignoni, is that adept guide. Martignoni has spent the past twelve years working in Catholic apologetics: he has led a weekly Catholic apologetics program on an Evangelical radio station, distributed more than one million audio copies of talks he has given, and hosted an apologetics show on EWTN. 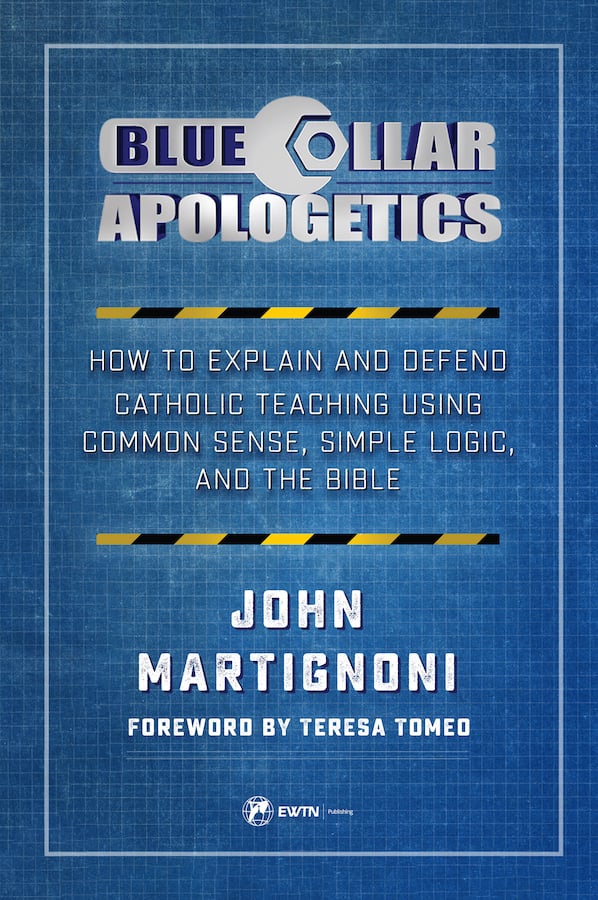 We All Need Apologetics

You might object, “I don’t engage in theological debates with Protestants, so this book doesn’t apply to me.”

Martignoni makes it clear that he intends this book first and foremost for evangelizing Catholics. He writes, “You cannot explain what you do not know. You cannot defend what you cannot explain.” So Blue Collar Apologetics is first about helping Catholics know and understand their faith. No matter what your level of education or formation, we could all deepen our catechesis.

“Apologetics is too complicated and involved for me,” you may think.

If that’s your concern, then this book is perfect for you! Martignoni’s audience is the average Catholic. He writes in a very down-to-earth, approachable manner, so I never felt lost or intimidated while reading.

Martignoni uses common sense, logic, and the Bible in shaping his defense of Catholic teaching. He also employs four “strategies": go-to tactics you can employ individually or collectively when dialoguing with Protestants.

Martignoni calls the first strategy “The Ignorant Catholic.” If someone asks you a question about Catholicism and you don’t know the answer, it’s okay to say, “I don’t know.” But make sure to add, “I will find out the answer and get back to you” (and follow through!).

The second strategy is “How to be Offensive (Aw-fensive) without Being Offensive (Uh-fensive).” Stop being on the defensive; start asking your own questions to encourage the other person to consider his or her beliefs. If a Protestant says that we are saved by faith alone (Sola Fide), counter with this query: So do we need to love God in order to be saved? If the answer is yes, then we are not saved by faith “alone.”

Strategy number three—”It’s the Principle of the Thing”—pulls Catholic principles out of Scripture. For example, a Protestant may ask where one can find Purgatory in the Bible. While the word “Purgatory” itself doesn’t appear in Scripture, the truth behind that teaching does. You can point to a verse such as Revelation 21:27: “But nothing unclean shall enter it [heaven].” The principle underlying this verse is that no stain of sin will enter heaven.

Finally, the fourth strategy is called “But That’s MY Interpretation.” This centers on the question of authority. Protestant theology typically implies that each person has the right to read and interpret the Bible for him or herself. So, according to their own teaching, your interpretation has the same authority as theirs. Since they are fallible, that means anything they say to you could be the wrong interpretation.

Using these four strategies, Martignoni tackles the major topics of debate between Catholics and Protestants:

This book led me to treasure and understand my faith in a more profound way. I specifically would like to highlight Martignoni’s discussion on marriage, which I found beautiful.

Beginning in Genesis, God reveals His three-step plan for marriage. First, man leaves his father and mother (making a total commitment), then man cleaves to his wife (giving himself totally and completely), and last, the two become one flesh. Matrimony is a process, which begins with the wedding ceremony, but is not completed until the husband and wife come together in the marital embrace. The marital embrace is a renewal of their wedding vows: a re-presentation of themselves to one another and to God.

Jesus also went through this same three step process for His Bride, the Church. First Jesus left His heavenly Father and His earthly mother (Mary) to establish His own family, the Church. Jesus cleaves to His Bride, the Church, giving Himself fully without reservation. Through His death, Jesus makes us one with Himself. The Bridegroom is presented to the Bride (the Church) at the Wedding Feast: the Eucharist, a re-presentation of His self-gift on the Cross.

Martignoni asserts that the Eucharist “is the ultimate marital embrace.” In this sacrament, Jesus plants the seeds of eternal life in our bodies. From this parallel, he proceeds to demonstrate why the Catholic Church teaches against contraception, something most Protestants do not understand. The root of the problem is that, lacking a Eucharistic theology, Protestants cannot have a correct theology of Marriage.

I have taken extensive notes from my reading of Blue Collar Apologetics. I highly encourage you to pick up this book! You never know when God will put you in a position to evangelize someone. Be prepared and confident for these opportunities, and in the midst of reading Blue Collar Apologetics, deepen your own love of the Catholic Faith.

Posted by Cassandra at 12:32 PM No comments: