"The blood is the life."

Before reading Bram Stoker's Dracula, my associations with the book included bats, sharp fangs, blood, and garlic.  Never did I connect Dracula with my faith.  However, upon finishing the novel, I can definitively say that it is an extremely Catholic book. 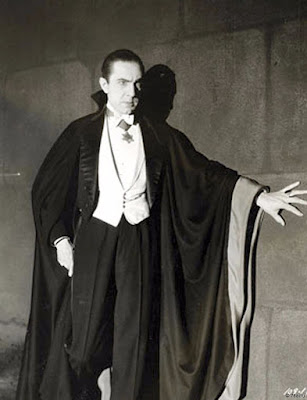 First, a look at the antagonist.  Dracula is vile, repulsive, corrupt, sinister, and cunning.  He literally sucks life from his victim, condemning him or her to his same state of "un-dead"--eternally roaming about the world seeking the ruin of other souls.  In a grotesque reversal of Christ shedding his blood on the cross to give eternal life, Dracula sucks blood to condemn his victims to share in his punishment.  Dracula is powerful and possesses a strength and abilities beyond mere man.

Never did I imagine such wrath and fury, even to the


demons of the pit.  His eyes were positively blazing.  The red light in them was lurid, as if the flames of hell fire blazed behind them.  His face was deathly pale, and the lines in it were hard like drawn wires; the thick eyebrows that met over the nose now seemed liked a heaving bar of white-hot metal.


As Edward Mordrake writes in Crises Magazine, Dracula is the Anti-Christ: he is often in the shadows, working in the periphery tempting and seducing; Dracula cannot enter where he is not first invited; he seeks worship and fears Christ.  His name itself means "dragon," a title used for the devil.  Dracula also pointedly assumes the name De Ville while in London (a clear play on the word "devil").


The heroes who battle against this demonic foe are led by Dr. Van Helsing--a Catholic who makes their mission clearly evangelistic.  Simply put: they are laboring to free souls for Christ.

Thus are we ministers of God's own wish: that the world, and men for whom His Son die, will not be given over to monsters, whose very existence would defame Him.  He have allowed us to redeem one soul already, and we go out as the old knights of the Cross to redeem more.  Like them we shall travel towards the sunrise; and like them, if we fall, we fall in good cause.

It is a supernatural battle they wage and their weapons are likewise spiritual.  The vampires recoil in terror when confronted with the cross of Christ.  Rosary beads are clutched in one hand, as effective as the gun held in the other hand.  When Van Helsing leads his group of men to a vampire's lair at night, he begins to seal the tomb, to prevent the vampire from being able to enter.


"What is that which you are using?"  This time the question was by Arthur.


Van Helsing reverently lifted his hat as he answered:--

A fragment of the Eucharist cleanses the earth, inhibiting Dracula from seeking refuge in his coffin.

Not all of the heroes are Catholic; most are Protestant.  Jonathan Harker, who opens the novel by traveling to Dracula's castle in Translyvania, is Protestant and initially is rebuffed by the idea of sacramentals.  However, by later in the novel, he carries a crucifix in full faith of its power.

D. Bruno Starrs, in his article Keeping the Faith: Catholicism in "Dracula" and Its Adaptations, notes that Harker first confronts Dracula alone in his castle and is subsequently defeated.  This solitariness is reflective, perhaps, of the individual testimony that frequently characterizes the Protestant faith.  But in the end, Harker joins a community of believers and it is only through their communal effort--symbolizing the body of the Church--that they destroy the evil that is Dracula.

There is a Marian influence, too, through the character of Mina.  She is the virtuous woman who inspires and guides the group of men battling Dracula.  Van Helsing lauds her the group's "star and our hope," which may be a reference to the Blessed Mother's titles "Star of the Sea" and "Our Lady of Hope."

While many contemporary scholars interpret Bram's novel through a Freudian lens, reading Dracula as a description of the Victorian woman's repressed sexuality may be an assertion of today's obsession with sexual matters upon the work.  Take, for example, one scene: Lucy (who is one of Dracula's victims and has become a vampire herself) is freed from her "un-dead" state by her fiance Arthur, who drives a wooden stake through her heart.

The Freudian interpretation states this excerpt is a symbol of sexual intercourse.  Lucy, a sexually-driven young woman, sought to freely express and pursue her sexual drives by becoming involved with Dracula.  This action threatened the Victorian social norms for women, so Lucy's fiance ended her wantonness by subduing her through the sexual act (symbolized by his driving the wooden stake deeply through her).  Lucy was restored to a monogamous, marital relationship with a man and was, therefore, saved.

Or so says one interpretation.

The sheer volume of Catholic imagery and themes in Bram's work seem to place greater weight and plausibility to another way of reading Dracula.  Lucy is not a woman with driving sexual desires; she is an innocent, chaste girl who is a victim of Dracula's evil.  She deserves the reader's sympathy.  In this scene, her fiance performs a courageous act of sacrificial love in freeing her soul from its captivity in her un-dead body.  Lucy is liberated through the wooden stake, symbolic of the wood of the cross that frees us from sin.  After the deed, Van Helsing urges Arthur:

And now, my child, you may kiss her.  Kiss her dead lips, if you will, as she would have you to, if for her to choose.  For she is not a grinning devil now--not any more a foul Thing for all eternity.  No longer is she the devil's Un-Dead.  She is God's true dead, whose soul is with Him!

Dracula is a novel about blood: the blood of the demon who gives death as well as the Blood of Christ who gives life.

Considering that Stoker's novel was the trailblazer, laying the foundation and precedent for developing vampire mythology, it is fascinating (and troubling) to reflect on modern-day adaptations of his work.

Stephenie Meyer wrote her widely-popular Twilight novels, a series centered on the romance between Bella Swan and Edward Cullen.  She develops Edward, through Bella's eyes, as seemingly perfect.  Readers have fallen in love with the character.  He is strikingly handsome, irresistibly attractive, strong, intelligent, wealthy.  Oh--and he is a vampire.

Twilight's opening page begins with a quote from Genesis: "But of the tree of the knowledge of good and evil, thou shalt not eat of it: for in the day that thou eatest thereof thou shalt surely die" (2:17).  Similarly, the cover art of the book displays two pale hands, offering a red apple.

The forbidden fruit in Genesis represents evil and sin.  The correct reaction to a vampire--who is evil--should be repulsion, fear, and disgust.

Meyer took what Stoker created and completely reversed it.  The vampire is the hero: he is no demon, but a demi-god.  Heaven is not the goal of this life; eternal life here, as a vampire, is Bella's singular pursuit.

In Twilight, what was intrinsically evil--a symbol of the devil--becomes a god, the source and origin of all Bella's happiness.

Dr. Daniel McInerny states in his lecture "Sucking the Life from Our Children: Hollywood and the Romance of the Living Dead" that Edward and Bella, by being together, break a series of prohibitions.  It is in this disobedience that they find a version of innocence and salvation.  In the book, Edward makes a comment about the lion lying down with the lamb--a Biblical image that refers to a time of peace and harmony.  Christ has not brought about this era; Bella and Edward have by their disobedience.

Ultimately in the series, Bella does die and becomes a vampire.  But here's the catch: like the Genesis quote, she takes the forbidden fruit and dies.  Yet, this is her happy ending!  Condemnation here on earth, her mortal soul bound as an Un-Dead, is her blissful, happy-ever-after with Edward.

This book was a New York Time's bestseller.  Millions of children, teenagers, and young adults eagerly read the novels.  I understand it: at the time, I was one of them.  Now, in retrospect, I cringe.  I cringe at the writing and plot, but even more so at the distortion of good and evil.

Many faithful Christians condemn the Harry Potter books (a controversy I will not enter--at least in this post).  It seems that Twilight should at least be equally avoided and criticized.  Its protagonists find eternal joy in each other's eternal punishment.

In light of Dracula, the darkness of Twilight is profound.

Posted by Cassandra at 4:20 AM No comments: