Lessons from Return of the King

"For thus it is spoken: Oft hope is born, when all is forlorn."

In this final book in the Lord of the Rings trilogy, Frodo and the Fellowship find themselves in the darkest places yet--literally and figuratively.

As Sauron wages his war by attacking Gondor, the sky itself becomes black and day looks no different from night.

The word was darkling.  The very air seemed brown, and all things about were black and grey and shadowless; there was a great stillness.  No shape of cloud could be seen, unless it were far away westward, where the furthest groping fingers of the great gloom still crawled onwards and a little light leaked through them.  Overhead there hung a heavy roof, sombre and featureless, and light seemed rather to be failing than growing.

The battle strategy for confronting such evil seems almost absurd.  Gondor, the principle city opposing Mordor, must be defended against Sauron's powerful, relentless attack.  Such a victory depends on several factors, none of which are guaranteed and most of which are doubtful at least: whether the riders of Rohan can reach Gondor in time and find a way through to the battlefield, whether Aragorn can muster a force of his own, whether the Steward of Gondor, Denethor, can capably lead his people when they need him most...

Then, if such a victory should be achieved, the armies of Gondor must look still East, where the Ring-bearer slowly, painfully creeps into the heart of Mordor to destroy the one Ring.  To give Frodo his best chance, the forces of Gondor must wage their own offensive...a strategy that places them precisely in the very grip of the Enemy himself, severely outnumbered and overpowered.  But there is no other choice--all must be put on the line to distract Sauron, occupying his time and attention, diverting his Eye from the two small hobbits who carry with them the one thing he desires above all else, the one thing with which he could rule--and destroy--Middle Earth.

The goal of destroying the one Ring becomes bleaker as Frodo and Sam face growing perils and obstacles, from Gollum's treachery to the very elements of Mordor that provide few means for them to quench their scorched throats.  The Ring weighs upon Frodo with each step toward Mount Doom, until a blackness covers his eyes and the only image he can see is the fiery circle of Sauron.

The darkness of the Enemy is perhaps his most effective weapon.  In the face of such obvious, unrepentant, vicious evil, what can one do?  The weight of evil is powerful, crippling.  It drives fear into the heart and deadens one's will.

"...yet another weapon, swifter than hunger, the Lord of the Dark Tower had: dread and despair.  The Nazgul came again, and as their Dark Lord now grew and put forth his strength, so their voices, which uttered only his will and his malice, were filled with evil and horror.  Ever they circled above the City, like vultures that expect their fill of doomed men's flesh.  Out of sight and shot they flew, and yet were ever present, and their deadly voices rent the air.  More unbearable they became, not less, at each new cry."

The darkness of Mordor, of evil--it is the same darkness as Good Friday.  As Christ hung on the cross, His life slowly ebbing away, the sun's light failed and the world was cast into darkness.

What must His disciples have felt at that 3:00 hour, when the Son of Man breathed His last?  Had Jesus failed?  As the stone was rolled over the tomb, the dead body of Christ laying in the dark sepulcher, what were the thoughts and feelings of His followers?  Doubt, fear, sorrow, distress, discouragement...had evil emerged the victor?

Perhaps the hope they had placed in their Rabbi was all for naught.  The darkness of evil threatens to quench any light of hope.

"Pride and despair!" he [Denethor] cried.  "Didst thou think that the eyes of the White Tower were blind?  Nay, I have seen more than thou knowest, Grey Fool.  For thy hope is but ignorance.  Go then and labor in healing!  Go forth and fight!  Vanity.  For a little space you may triumph on the field, for a day.  But against the Power that now arises there is no victory."

Denethor, steward of Gondor, derides the "fool's hope" Gandalf offers him.  It has all been determined: their fate is sealed.  The Evil is too great and it is only a matter of time until it has an unequivocal victory.

In the darkest regions of Mordor, deep in the black tunnels where Frodo and Sam find themselves lost, suffocating, and attacked, a light shines: the small phial given to Frodo by Galadriel, the great elf from Lorien.

It is a literal light, dazzling in its brilliancy and power, overcoming the orcs and evil forces that are confronted with it.

It is a figurative light, too: it is the light of hope--a hope that shines when the darkness of evil is most pervasive and overwhelming

There, peeping among the cloud-wrack above a dark tor high up in the mountains, Sam saw a white star twinkle for a while.  The beauty of it smote his heart, as he looked up out of the forsaken land, and hope returned to him.  For like a shaft, clear and cold, the thought pierced him that in the end the Shadow was only a small and passing thing: there was light and high beauty for ever beyond its reach.

Tonight in Catholic Churches around the world the night begins in darkness.  And then there is a light: the sole light of the new Paschal candle, which slowly spreads its flame through the assembly, illuminating the entire church and each person there.

To the darkness of death, the light of life has come!

Sam realized this hope of the ultimate victory.  No matter what happened to him, whether he and Frodo actually succeeded or whether they ever returned home to the Shire--the Shadow of Sauron would never have the final say.  Evil never has the last word.

The victory has been won!  The Ring being cast into the fires on the Mount of Doom is our sin being nailed to the cross on the Mount of Golgotha.  Out of the darkness of that Good Friday comes the radiant light of the Resurrection.

We have our own light that we can cast into the shadows that threaten us, shadows of despair: Christ has won!  He is Risen!

Sometimes, the evil of our personal sin or the sins of the world loom large over us and it is easy to lose our perspective.  The dirt and grime of today's failures, struggles, and pains cloud our eyes from looking beyond: beyond the cross, there is something more.  And one day, if we don't lose hope and continue in the struggle to choose what is good, one day we shall rise, too.

When the perishable puts on the imperishable, and the mortal puts on immortality, then shall come to pass the saying that is written:
“Death is swallowed up in victory.”

“O death, where is thy victory?


O death, where is thy sting?”
The sting of death is sin, and the power of sin is the law. But thanks be to God, who gives us the victory through our Lord Jesus Christ.  Therefore, my beloved brethren, be steadfast, immovable, always abounding in the work of the Lord, knowing that in the Lord your labor is not in vain. (1 Cor 15:54-58) 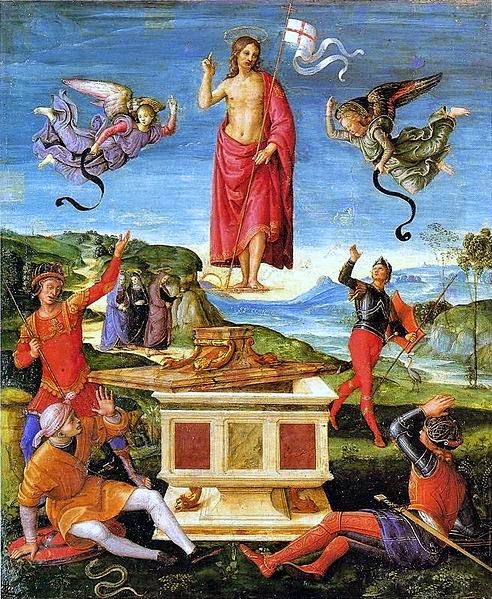 Posted by Cassandra at 8:44 PM No comments: