"Now, I return to this young fellow.  And the communication I have to to make is, that he has Great Expectations...I am instructed to communicate to him...that he will come into a handsome property.  Further, that it is the desire of the present possessor of that property, that he be immediately removed from his present sphere of life and from this place, and be brought up as a gentleman--in a word, as a young fellow of great expectations."

Charles Dickens' novel, Great Expectations, is the coming-of-age story of protagonist Philip Pirrip, or "Pip."  It is Dickens' penultimate novel, published serially from 1860-1861.  The narration is first person point of view--Dickens' only second book to be written so.

Pip is an orphan who is begrudgingly raised by his belligerent  older sister (Mrs. Joe) and her quiet, humble husband Joe, who is a blacksmith.  Pip's future seems quite obvious: he will work in the forge with Joe, initially as an apprentice and perhaps in time, as a partner.

Then, as ofttimes happens in life, everything changes with one pivotal event.

That was a memorable day for me, for it made great changes in me.  But it is the same with any life.  Imagine one selected day struck out of it, and think how different its course would have been.  Pause you who read this, and think for a moment of the long chain of iron or gold, of thorns or flowers, that would never have bound you, but for the formation of the first link on one memorable day.

Pip's memorable day is when he is invited to visit Satis House, the affluent home of eccentric, heartbroken Miss Havisham.  The word "satis" comes from Latin and means "enough."  Pip is introduced to a social status he has never encountered before.  He also meets Havisham's adopted daughter, the stunningly beautiful Estella.  Pip is instantly captivated by her and simultaneously crestfallen by the realization that he is not "enough" for her.  He is just a coarse boy whom she mocks.

As his visits to Miss Havisham become regular, Pip hopes that she will employ her wealth to make him a gentleman, that he will be destined for Estella.  As these longings take root in his heart, his former path of labor in the forge becomes despicable.  When Joe--kind-hearted Joe who has taken care of Pip and loves him as a son--meets Miss Havisham, Pip is overcome with embarrassment on account of Joe's unpolished social skills and irregular dress. 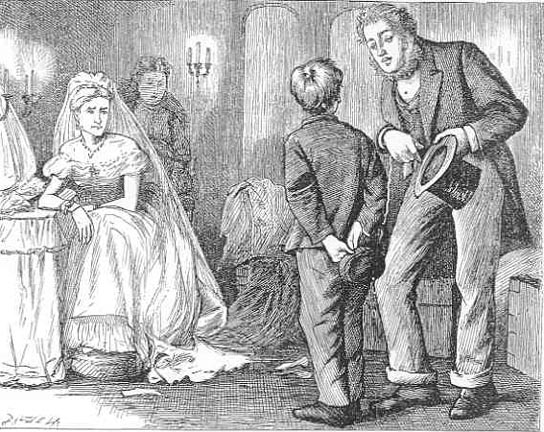 Pip's ambitions for his life have changed and the temptation for something better darkens what was once perceived to be a happy future.  For Pip, there is no contentment as he perceives the rungs of the social ladder and contemplates his lowly status.

...I would decide conclusively that my disaffection to dear old Joe and the forge, was gone, and that I was growing up in a fair way to be partners with Joe and to keep company with Biddy--when all in a moment some confounding remembrance of the Havisham days would fall upon me, like a destructive missile, and scatter my wits again.  Scattered wits take a long time picking up; and often, before I had got them well together, they would be dispersed in all directions by one stray thought, that perhaps after all Miss Havisham was going to make my fortune when my time was out.

Then, abruptly and unexpectedly, Pip's fortune changes--literally and figuratively.  He is informed by a lawyer that a benefactor (who wishes to remain nameless for the time being) has elected to endow Pip with a substantial sum of money, with the intent of making him a gentleman.  Pip has received his "great expectations."

He prepares to move for London.  Already, in his mind, Pip is now delineated from Joe and his kind-hearted friend Biddy.  With his wealth, Pip has reached a new social strata.  And, while Pip is anxious to begin the life he has longed for--the life of a gentleman--he is surprised to find that the first night of his great expectations is also the loneliest.

Pip relocates to the city, but again, it isn't exactly what he anticipated.

We spent as much money as we could, and got as little for it as people could make up their mind to give us.  We were always more or less miserable, and most of our acquaintance were in the same condition.  There was a gay fiction among us that we were constantly enjoying ourselves, and a skeleton truth that we never did.  To the best of my belief, our case was in the last aspect a rather common one.

Often, in spite of his superior social ranking and affluence, Pip longs for the kitchen fire at home.

Pip operates under the understanding that Miss Havisham is his anonymous donor.  But in a stunning revelation, Pip learns that his great benefactor is no lofty social figure, member of an admired family, or respected leader.  Instead, it is a convict named Magwitch whom young Pip had (reluctantly) helped escape many years ago.  The convict was grateful for the kindness extended to him.  He remembered Pip and, though an outlaw removed from society, Magwitch sought to prove his worth by fashioning his own gentleman.

"Yes, Pip, dear boy, I've made a gentleman on you!  It's me wot has done it!  I swore that time, sure as ever I earned a guinea, that guinea should go to you.  I swore arterwards, sure as ever I spec'lated and got rich, you should get rich.  I lived rough, that you should live smooth; I worked hard that you should be above work.  What odds, dear boy?  Do I tell it fur you to feel a obligation?  Not a bit.  I tell it, fur you to know as that there hunted dunghill dog wot you kep life in, got his head so high that he could make a gentleman--and, Pip, you're him!"

Pip believed himself above his humble beginnings.  Yet, it was someone even less refined and more an outcast who made him a gentleman.  Nothing was as he expected at all: the experience of being rich, the identity of his benefactor, the source of happiness and contentment.

Magwitch, in endowing Pip with so much money, enabled the young man to leave a course already chartered for him.  That seems like something positive, but...what if the life already planned for him was a good one?  Maybe, even, a better one?

Magwitch, in many ways, used Pip to achieve dreams that were out of Magwitch's reach.  The convict himself could never become a true gentleman; the next best thing was to make one of someone else.  Magwitch, in other words, was striving to live vicariously through Pip.

A parallel dynamic occurs between Miss Havisham and Estella.

Miss Havisham, with quite different motivations, was doing the same with her adopted daughter, Estella.  Left heartbroken at the altar, Miss Havisham lives with constant anguish and regret: she still wears her withered wedding gown and her untouched wedding cake rots on the table in her room.  Driven by this bitterness, Miss Havisham rears Estella as the vehicle for enacting revenge on the male race.  Estella, therefore, is not taught affection or love.  She is taught to entice, captivate, and coldly break hearts.


"It seems," said Estella, very calmly, "that there are sentiments, fancies--I don't know how to call them--which I am not able to comprehend.  When you say you love me, I know what you mean, as a form of words; but nothing more.  You address nothing in my breast, you touch nothing there.  I don't care for what you say at all.  I have tried to warn you of this; now, have I not?"

Magwitch and Miss Havisham take the experiences and pains of their lives and project them onto their adopted children.  Rejected by society, Magwitch wants to elevate Pip to the upper social class.  Heartbroken by a man, Miss Havisham guides Estella to emotionally ravage men.

But what these two forget is that Pip and Estella are their own people, with their own personalities, futures, dreams, and vocations.

When Pip is removed from the home he has known, with the good people who have reared him and taught him, Pip is thrust into another world--a world that is not exactly beneficial for him.  Pip often reflects that he has not actually accomplished anything as a gentleman.  He also incurs debt, thus ultimately possessing less money than before his expectations.

Had Pip been left alone at the forge, while he would have yearned for Estella and high society for awhile, in time he would have accepted his place and been happy for it.  But instead, someone else's expectations disturbed and disrupted the path set before Pip.

Pip and Estella follow different, yet parallel, paths of internalizing their own personal desires.  Through the suffering that accompanies living another's desires and ambitions, both begin to see their true way in life.

In time, Pip comes to see that his humble home at the forge is not a place to disparage, but a treasure to cherish.  And the gentleman he hopes to aspire to is not to be found in London, but in the unassuming Joe whose kindness is unwavering.  Here indeed is a gentle man.

I had not been mistaken in my fancy that there was a simple dignity in him.  The fashion of his dress could no more come in its way when he spoke these words, than it could come in its way in Heaven.


Pip's transformation and change through the novel is beautiful.  His self-realization as he perceives his faults is profound, while his efforts to correct his shortcomings impressive.  Narrated in first-person, the reader comes to know Pip and his feelings so intimately. Dickens has crafted an outstanding book.

As a parent, it is a reminder that my children are not me.  They have their own unique interests and talents.  The struggles I had had may not be theirs.  The dreams I have dreamt may not be theirs.  And for me to project my life's experiences onto them and their wide, open futures may hamper and destroy what will ultimately bring them the greatest joy: living God's will for their lives, not mine.

Posted by Cassandra at 5:36 AM No comments: