Lessons from My Cousin Rachel

There must be something in the nature of love between a man and a woman that drove them to torment and suspicion.

Author Daphne Du Maurier was known to me for her best-selling novel Rebecca, a book I devoured in my high school years and still love.  I haven’t revisited any of Du Maurier’s books since, which I now regret, since I couldn’t bear to put down My Cousin Rachel.  Du Maurier is a master of suspense, mystery, and foreboding.  There are no warm, fuzzy, happy endings here; she writes to unsettle and disturb, which in turn, prompt you to analyze the characters to see who may be in the right … if anyone. 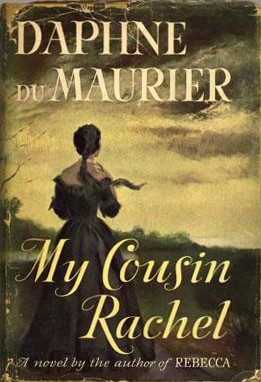 My Cousin Rachel begins with a sympathetic protagonist.  Philip Ashley became an orphan as a young boy and subsequently was raised by his older cousin, Ambrose Ashley.  Ambrose owns a sprawling English estate and here Philip spent his childhood.  Ambrose had an unorthodox parenting style.  For example, he taught Philip his alphabet by giving a profanity for each letter.  A steadfast bachelor who has little regard for women, Ambrose ensures that his household contains only men.  As such, the home lacks any feminine touch: dust covers much of the furniture and the place smells like a dog kennel.  Ambrose, considering Philip his heir, prepares him for the management of the estate.  Philip, for his part, idolizes his older cousin and his main objective in life is to be just like him.

I never had any desire to be anywhere but at home.

Of course, things abruptly change.  Ambrose’s doctor advises him to spend the winter abroad, in the dry, warm air.  During his third winter in Italy, Ambrose makes the acquaintance of his cousin, Rachel.  Rachel is a widow, her late husband having died in a duel.  She was left with a great deal of debt and an empty villa in Florence.  Like Ambrose, she has a love for gardening, which is how they first form a friendship.  A few months later, Ambrose writes to Philip that he and Rachel are married.

Philip’s initial reaction, which he feels guilty about, is jealousy.  Ambrose was his world and now he must share Ambrose with someone else … and not just anyone else, but a woman!  Philip paints pictures in his mind of Rachel: large and angular with a loud laugh; pale and covered with a shawl, an invalid confined to her chair; a curvy young woman with bouncing curls.  Philip despises all these images and suddenly his entire future and home seem to be in jeopardy.

Philip’s only knowledge of what transpires in Italy between Ambrose and Rachel comes from Ambrose’s letters, which become increasingly concerning.  Ambrose mentions that he can only write when his wife is out of the house and that she watches him all the time.  Ambrose has also fallen ill with crippling headaches that drive him to almost madness and then leave him powerless in bed.  Philip has already decided to travel to Florence to be with Ambrose when, on his way out the door, he receives a final communication from Ambrose, written in scrawling, barely readable writing:

For God’s sake, come to me quickly.  She has done for me at last, Rachel my torment.  If you delay, it may be too late.

Philip, in great trepidation, travels to Rachel’s villa in Florence, but quickly learns that Rachel has left.  Ambrose is also gone: he died, just a couple of weeks prior.  His cause of death is said to be a brain tumor, which a relative of his also died from.  Philip is stunned by the news.  He asks for Ambrose’s possessions, but learns that Rachel has taken all of them with her.  Philip is convinced that had he been there, Ambrose would not have died.

I swore that, whatever it had cost Ambrose in pain and suffering before he died, I would return it, in full measure, upon the woman who had caused it.  I believed in the truth of those two letters that I held in my right hand.  The last Ambrose had ever written to me.  Someday, somehow, I would repay my cousin Rachel.

Returning home is a comfort to Philip, realizing that the estate now belongs to him (though, by a technicality, it does not pass into Philip’s full ownership until his twenty-fifth birthday in a few months’ time).  Not long after his return, however, Philip learns that Rachel has also traveled to England and wishes to see him, to bestow upon him all of Ambrose’s possessions.  Philip’s godfather points out to him that Rachel has inherited nothing from Ambrose: Ambrose never rewrote his will after his marriage, thus the entire estate passes to Philip only.  Philip impulsively invites Rachel to his home, intent on confronting her.

But Rachel is quite unlike any of the pictures he has formed in his mind.  She is short, with brown hair and wide eyes, dressed in mourning black.  She speaks of Ambrose and his home in England with great familiarity and knowledge, making Philip realize how well she knew Ambrose.  She has an easy manner and a bubble of laughter in her voice.  In sharing a story Ambrose told her, Philip finds himself laughing alongside her.

Soon Philip realizes that the woman he hated is not Rachel at all.  And from hated his emotions toward Rachel turn to quite the opposite: appreciation, admiration, attraction … and even obsession.  Philip’s actions become increasingly impulsive.

Du Maurier creates the perfect tension between guilty and innocent.  Is Rachel guilty of having a hand in Ambrose’s death—did she, in fact, cause his death?  Philip, once convinced of her wrongdoing, swings to the opposite extreme and refuses to even entertain the idea that she could do such a thing.  Yet, Ambrose continues to assert his viewpoint, through discovered letters hidden in one of his books and a coat pocket.

Whom can the reader trust?  Is Ambrose a jealous husband or a victim of Rachel’s greed?  What are Rachel’s feelings toward Philip?  Does she genuinely care for him or is she simply interested in the inheritance she wishes belonged to her?

In all this drama, one questions whether love exists at all between any of these characters.  To them, love seems to drive someone literally mad, acting impulsively, desire gripping the heart in order to totally consume the other.  Love, as the opening quote indicates, seems to drive a man and woman to jealousy and suspicion.  I knew someone in college who dated a man.  This man was completely head over heels for her, yet, during a disagreement, he suddenly blurted out to her, “I hate you!”  His intense feelings for her actually drove him to a moment of hatred … his passion for her became like a knife, wounding him, when not fulfilled in the way he desired.

I would argue that this is not love at all.  Perhaps one could label it as obsession or infatuation, but not love.  Genuine love does not destruct or tear apart; it builds.  True love is not jealous or consuming; it is freeing and respectful of the other person’s self.  Real love does not concern itself with fulfilling one’s personal desires; it seeks to serve the other, to sacrifice for the other’s good.

As I read My Cousin Rachel, I varied between sympathy and frustration toward Philip.  On the one hand, he sometimes acts like a child: selfish in what he wants and impulsive in trying to obtain it.  Yet, as he navigates a woman as complicated and experienced as Rachel, he is at a major disadvantage.  He has little to no exposure to the wiles, emotions, reactions, and mind of a woman.

Long days in the open, working with the men at harvest time; arguments with tenants behindhand with their rent or involved in some quarrel with a neighbor which I had to settle; nothing of this could compare to five minutes with a woman whose mood of gaiety had turned in a single instant to hostility.  And was the final weapon always tears?  Because they knew full well the effect upon the watcher?

Ambrose neglected a critical component to Philip’s rearing, never preparing him for the experience of a woman: how to treat her, how to be wary of her, how to love her.  But maybe it’s because Ambrose himself never learned these lessons until too late.  Woman and man are not the same: complementary, but not identical.  But without understanding each other and the true nature of love, man and woman have the ability to tear each other apart … even in the name of love.

Email ThisBlogThis!Share to TwitterShare to FacebookShare to Pinterest
Labels: Love