(This post is part of a series discussing Christ's Crucifixion and the Atonement theories that seek to understand the cross.  Here is the first post in the series.)

PART TWO: WHO IS SATAN AND WHAT IS HIS RELATIONSHIP TO US?

To understand the classical view of the Atonement, one must first understand who Satan is and his relationship to us.

In his book, Evil and the Justice of God, N. T. Wright provides a direct and concise definition of Satan. He writes, “The Satan, as portrayed in Scripture and as experienced and taught about by many Scriptural guides, is flatly opposed to God, supremely to God incarnate in the crucified and risen Jesus Christ.”[1]

The question becomes how the Satan, a creature of God, became the agent of evil. Origen, one of the Church Fathers, stressed the importance of becoming familiar with Satan when he wrote, “No one will be able to know the origin of evil who has not grasped the truth about the so-called Devil and his angels, and who he was [before] he became the Devil…”[2]

Church Tradition teaches that the devil was originally one of God’s angels. As one of God’s creations, the devil was originally good, thus the evil angels became evil via their own sin.[3] In his work On Evil, Saint Thomas Aquinas explains that the sin of the devil did not consist in his desiring to be equal to God, as the very nature of God does not permit another power equal to His omniscient and omnipotent self. The devil, as an angel of pure intellect, fully recognized the futility of aspiring to be on par with God. Therefore, the sin of the devil was not of a natural, but rather supernatural, character. The devil sought to obtain supernatural happiness by his means: the devil desired happiness brought about on his own initiative instead of in cooperation with God’s grace.[4]

Due to this irreversible rejection of God’s grace and the sinful pride innate in Satan’s act, the devil was banished from heaven. Wright explains, “The Satan, it seems, is a nonhuman being, a type of angel, perhaps in some accounts an ex-angel or fallen angel, and he or it…comes to be opposed to humankind…”[5]

Indeed, Satan has become opposed to creation as a whole. What God proclaims as “very good” (Genesis 1:31)[6], Satan desires to destroy; where God brings life, Satan fosters death. The means to bring about death to creation is, of course, through sin. “…Sin is the rebellion of humankind against the vocation to reflect God’s image to the world, the refusal to worship God the Creator, and the replacement of that worship and that vocation with the worship of elements of the created order…”[7]

The inevitable result of sin is truly death, as sin severs someone from God, the source of all life.[8]

Therefore, Satan exists in this world, lacking a physical being, but powerfully present as a “parasite” on God’s people and creatures.[9]

Scripture frequently attests to Satan’s manipulation and derogatory presence among humankind. The Old Testament speaks of a distinct figure called “the satan,” a word that means “the accuser.” In the book of Job, the Satan is present in the heavenly court, acting as a public prosecutor against humankind as Satan solicits God to challenge Job, hoping to provoke Job to transgress God’s commands. Satan appears once again in the Chronicler’s description of David’s census (1 Chronicles 21:1), as well as Zechariah 3:1, Genesis 3, and the apocalyptic visions of the prophet Daniel.[10]

Within the New Testament, René Girard in I See Satan Fall like Lightning explains that Satan appears as a seducer of humankind. As seducer, Satan tries to convince people following him is easier and preferential to following Christ. Then, as soon Satan is successful in seducing, he accuses.

In the Old and New Testament, “The Biblical picture of the Satan is thus of a nonhuman and nondivine quasi-personal force which seems bent on attacking and destroying creation in general and humankind in particular, and above all in thwarting God’s project of remaking the world and human beings in and through Jesus Christ and the Holy Spirit.”[12]

A series of Church authors following the death and Resurrection of Jesus affirm this declaration about Satan. Saint Ignatius of Antioch, writing after the apostles but before the official canon at the end of the 4th century, confirmed that the world is ruled by the devil, whose purpose is to frustrate God’s plan by diverting people from accomplishing God’s Will and furthering the Kingdom of God.

The devil confronts all Christians and, therefore, the world is truly a battlefield with lines drawn between Christ and His followers on one side and the devil and his followers on the opposing side.[13]

Certainly, there are those today who reject this concept and notion of Satan. While Satan has a prominent role in the Gospels and Church Tradition, many modern Christians hardly pay him any mind at all.[14]

Since Satan is such an aloof topic at present, people fall to two dangers when discussing the devil, dangers that are necessary to explain and refute since, if not clarified, pose problems to understanding the classic view of the Atonement.
These misconceptions of Satan are aptly discussed in C.S. Lewis’ work The Screwtape Letters. One faulty notion is taking Satan too seriously and perceiving him as equal to God. It is always important to bear in mind that, while Satan is powerful and active in the world, his power is only a fragment of the all-powerful God Almighty. A subsidiary of this idea of Satan as equal to God is the precarious perception that all problems and misdeed are attributed solely to Satan. While Satan seduces and manipulates, it is the human person as a free moral agent who chooses a lesser good or, in other words, evil.[15]

The second misperception of Satan is to downplay him. People rightly dismiss the cartoon figure in red tights bearing a pitchfork, as Satan certainly is not this, but in doing so they incorrectly disregard the concept of a Satan altogether. Wright eloquently explains, “There are undoubtedly foolish and unhelpful ways of portraying the Satan, not least the popular imagination, and we are right to avoid them. But we shouldn’t think that by doing so we have eliminated the reality to which these trivializing images point.”[16] This creates the perilous atmosphere where, “Many theologians of the last century have been simply embarrassed by talk of the demonic…”[17]

Some theologians assert that the language discussing Satan is simply myth and fictitious, attributing Scripture passages dealing with Satan to psychological phenomenon. While this may sound pleasing to the contemporary ear, “both the Bible and massive Christian experience…over the centuries suggest otherwise.”[18]

Satan is not a person, but also is not an obscure ideology or psychological condition. In order to understand the classic view of the Atonement, one must recognize that Satan is a true, active, and powerful reality. For those who doubt or struggle with this truth, one needs only look to the example of Jesus. Professor Anton Fridrichsen writes in The Conflict of Jesus with the Unclean Spirits, “Jesus actualized Satan, just as He actualized God. Just as He treated with full earnest the coming Divine Kingdom, so He treated also the present dominion of Satan.”[19] 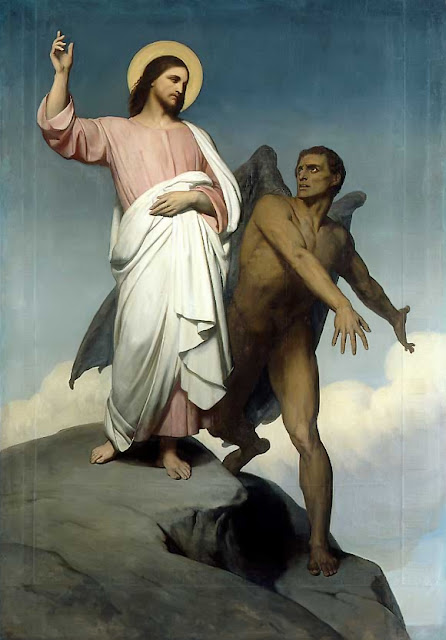 Posted by Cassandra at 1:02 PM