Lessons from East of Eden

Recently I’ve been thinking about the decisions my husband and I make as parents. Then I reflect back on my own childhood and the various choices my parents made. I love my parents, I am grateful for everything they have done for me, and I admire their many virtues. At the same time, however, when I take a broad view of my childhood, I see the times they’ve made choices that had negative effects on me or my siblings. I think, given the opportunity to go back in time, my parents would have chosen quite differently. I don’t hold a grudge against them for these choices; they are, after all, only trying to do their best. I have made mistakes in my parenting. We’re not perfect. We’re only human, right?

In a way, that’s what has happened since the beginning of creation. It’s part of our family history to fall: it’s written in our nature. Original sin very quickly manifested itself in actual sin: the fratricide of Abel, man’s first purposeful shedding of another man’s blood. The first sin of Adam and Eve and the fallen nature that came as consequence led to the first murder. And ever since, we’ve repeated these sins of our first parents.

Even those who aren’t familiar with the actual story of Cain and Abel still understand and feel its message. Even the holiest and most devout of us is capable of great evil. Is there any way out? Are we destined to repeat the sins of our parents?

That is one of the main themes explored in John Steinbeck’s East of Eden, which he published in 1952. He considered it his greatest work, describing it to a friend as, “ … the longest and surely the most difficult work I have ever done... I have put all the things I have wanted to write all my life. This is 'the book.' … Always I had this book waiting to be written." 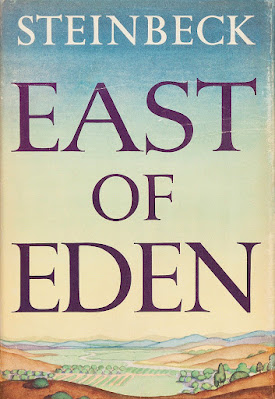 East of Eden follows three generations of the Trask family. That history demonstrates the generational sins of the family members, starting with lies. The devil was the first liar and it’s only fitting that, in a book loosely following the opening chapters of Genesis, lying should feature prominently. The father of the Trask family is named Cyrus and he builds his entire life on a life. Though he only fought in the Civil War for less than thirty minutes—receiving an injury shortly after his first battle began—Cyrus fabricates an entire other war history, spinning a tale that becomes true even in his own mind. Cyrus receives recognition, a position of power, and financial gain through the lies he creates about his war experiences.

No one could call him a liar. And this was mainly because the lie was in his head, and any truth coming from his mouth carried the color of the lie.

Cyrus has two sons, Charles and Adam (the first set of brothers who represent Cain and Abel—notice, for example, how their names both start with the letters C and A). Adam, though quite different from his father due to his kind-hearted, gentle demeanor, struggles with truth as well. His wife abandons him and their newborn twin boys (the second set of brothers, Cal and Aron). Adam struggles with what he should tell his sons about their mother. His wise servant, Lee, encourages him to tell the twins the truth:

“It’s the lie I’m thinking of. It might infect everything. If they ever found out you’d lied to them about this, the true things would suffer. They wouldn’t believe anything then.”

Despite Lee’s advice, Adam decides to tell his sons that their mother died in childbirth … a falsehood that later has disastrous consequences. Adam’s son, Aron, can’t conceive of a world where his father would lie to him, and the idea that his mother may be alive threatens the stability of his existence.

Aron felt that something had to die—his mother or his world.

Another parental error that continues through the generations is the tendency to create and pursue an idealized version of reality. Adam fell in love with Cathy when she appeared on his porch step, brutally injured and barely alive. Adam created a vision in his mind of who Cathy was, a vision so far from the truth of her character: he saw an angel where there was only a devil. Adam married Cathy and then traveled to the Salinas Valley in northern California, determined to build himself an Eden. He wanted to create a perfect family in a perfect home: an idealized reality. Adam couldn’t see the great danger of this ambition, even when his neighbor—-prophetic Samuel Hamilton—tried to make it clear to him.

“I’m going to make a garden so good, so beautiful, that it will be a proper place for her to live and a fitting place for her light to shine on.”

Samuel said satirically, “It’s my duty to take this thing of yours and kick it in the face, then raise it up and spread slime on it thick enough to blot out its dangerous light.”

Adam’s son, Aron, falls into the same error. As a young boy, he meets Abra and immediately falls in love with her, determined to make her his wife one day. When Aron becomes a teenager he yearns for purity and goodness, virtues he pours on Abra, desiring them in her so much that he begins to lose sight of her true nature–her fallen nature. He is more in love with an idea than with a person. Abra, who is keenly aware of her own transgressions, can’t reciprocate a love based on such an unreality.

The fathers in East of Eden also fail in forcing their children to fit a certain mold. Cyrus, a veteran, insists on Adam enlisting in the army despite Adam’s repulsion of violence.

He tested me and hurt me and punished me and finally he sent me out like a sacrifice, maybe to make up for something.

Even after his own negative experience of needing to follow his father’s career aspirations for him, Adam repeats the same dynamic with his own son, Aron. Adam wants his son to attend college. Aron gives college a try, but is disappointed and finds the experience not what he expected. Aron would like to quit and return to working on the family farm, but Adam won’t hear of it.

He felt let down and helpless, packed like a bird’s egg in the cotton of his father’s ambition for him.

Part of the reason these fathers insist on a certain path for their sons is due to the fact that they don’t truly know their sons: their hopes, dreams, and personalities. As a boy, Adam yearned for warmth, affection, attention, and understanding—things he never received from his stearn, imposing father. Yet, as a father, Adam repeats this style of parenting. For a long period of time he barely looks at his twin boys or even names them. As they grow, he wonders to himself that he barely knows them. His son, Cal, hungers for his father’s love, which feels distant and unretrievable:

When he was quite small Cal had discovered a secret. If he moved very quietly to where his father was sitting and if he leaned very lightly against his father’s knee, Adam’s hand would rise automatically and his fingers would caress Cal’s shoulder. It is probable that Adam did not even know he did it, but the caress brought such a raging flood of emotion to the boy that he saved this special joy and used it only when he needed it.

Mirroring the book of Genesis most closely is the way these fathers seem to favor one child over another. It is Adam who Cyrus chooses for military life, not Adam’s brother Charles. Charles seethes with jealousy, desperate for the crumbs of Cyrus’s affection. Then, as a father, Adam boasts of Aron’s ambition and academic success in going to college–never acknowledging Cal’s ingenuity and hardwork.

There are parallel gift-giving scenes too. Adam gave his father a puppy for his birthday, which he had found in the woods. Meanwhile Charles labored hard to earn enough money to buy Cyrus a new knife. Cyrus loved the puppy, training him and allowing him to sleep in the bedroom. The knife from Charles, however, remained discarded in a dresser drawer. In the next generation, Cal works to earn money for his father, a gift that is similarly unappreciated:

“I don’t want the money, Cal. … I would have been so happy if you could have given me—well, what your brother has—pride in the thing he’s doing, gladness in his progress. Money, even clean money, doesn’t stack up with that.”

Adam doesn’t seem to learn from the experiences of his childhood, but instead repeats the same mistakes his father made while raising him. Adam’s son, Cal, struggles with doing the right thing, praying to be good but feeling an inner battle to choose evil.

Is Cal, like Cain before him, always going to choose what is evil? Can he—and we—ever become good or will we repeat the sins of before?

Steinbeck seems to offer his readers hope. He suggests that those who are aware of their evil—precisely because of that awareness—can try to become good. Those who only see their goodness are blind to their fallen nature and, therefore, can never actually work at overcoming their shortcomings. True, we are all capable of great evil … yet, the other side of that coin is that we are also all capable of great good. We have a fallen nature; we are also free .. free to choose the good.

Humans are caught—in their lives, in their thoughts, in their hungers and ambitions, in their avarice and cruelty, and in their kindness and generosity too—in a net of good and evil.

In one critical scene, Adam, his servant Lee, and Samuel talk about the story of Cain and Abel. Lee points to something God says to Cain: “Why are you angry? Why are you dejected? If you act rightly, you will be accepted; but if not, sin lies in wait at the door: its urge is for you, yet you can rule over it” (Genesis 4:6-7). Lee explains that the Hebrew translation of the verse uses the word timshel, which means “thou mayest.” It means God gives Cain a choice, the way is open for Cain to choose what is good.

But “Thou mayest’! Why, that makes a man great, that gives him stature with the gods, for in his weakness and his filth and his murder of his brother he has still the great choice. He can choose his course and fight it through and win.

So will I repeat the mistakes of my parents as I raise my children? I have a fallen nature. I am going to make bad choices—maybe the same as my parents, but perhaps other ones. I will fail at times. But those errors don’t have to stand as the prominent moments of my parenthood. Through God’s grace, I can choose to keep trying. Then maybe my children will remember me most for my love, not my faults … as I remember my parents.

Posted by Cassandra at 3:52 AM