Lessons from For Whom the Bell Tolls

You are instruments to do your duty. There are necessary orders that are no fault of yours and there is a bridge and that bridge can be the point on which the future of the human race can turn.

If you only had three days to live, how would you live them?

For any soldier on the battlefront, the possibility of death, at any moment’s notice, is a constant reality.  As you try to kill your enemy, your enemy tries to kill you: death is the objective of both parties.  Maybe war is about winning, though when so many lives are lost, is there ever a true victor?

Poet John Donne wrote, “ … any mans death diminishes me, because I am involved in Mankinde; And therefore never send to know for whom the bell tolls; It tolls for thee.”  Any time someone dies, that loss of human life has ripple effects.  The human family, of which we all belong as brothers and sisters, mourns the death of any individual.  Does this include enemies too?  Well, yes: enemies who perhaps perished without any opportunity to atone for their misdeeds, who entered the world as innocent children and somewhere along the way, lost their way—perhaps through no fault of their own, but by the people who raised them or teachers who taught them.

Donne’s poem is the inspiration for the title of Ernest Hemingway’s novel For Whom the Bell Tolls. 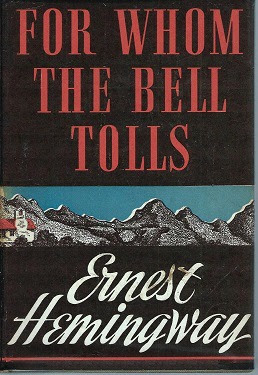 Published in 1940, For Whom the Bell Tolls takes place in May 1937 in Spain during the Spanish Civil War.  The protagonist is an American named Robert Jordan, a professor of the Spanish language who moved to Spain and joined the Republican cause.  The action of the novel takes place over the course of three days.  Jordan has a mission: he must destroy a bridge.  To do so, he must enlist the help of a band of guerrillas located in the mountains behind Franco’s line.

It is a fascinating and painful look at the life of a soldier at war.  There is the logistical aspect to the plot: Robert Jordan is ordered to blow up a bridge, a key tactic in the greater strategy of a battle about to unfold.  He must blow up the bridge at the appointed time.  In any wartime situation, soldiers will encounter friction: the unplanned element of surprise, of unforeseen events that get in the way of carefully laid plans.  Something inevitably goes wrong.  How do you respond?  How can you get the plan back on track?  In this novel, something as seemingly harmless as snowfall leads to deadly consequences. 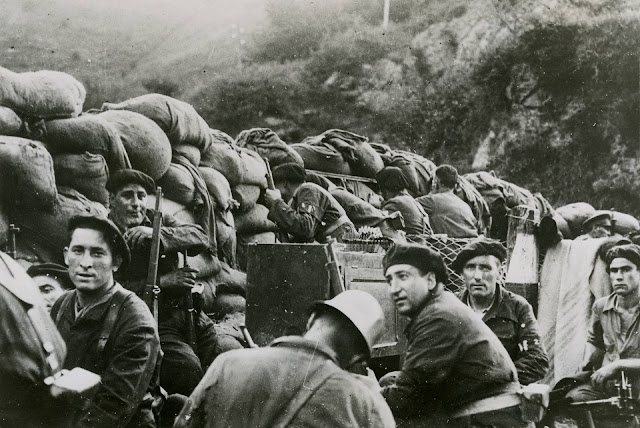 There are elements outside one’s control—such as weather—but Jordan must also deal with his compatriots, whom he must enlist for help.  The band of guerrillas poses its own difficulty.  Jordan needs their support, but can he trust them—especially the leader, Pablo, who is embittered after fighting many previous battles and who opposes blowing up the bridge?  On the other hand, there are members of the band who are supportive and encouraging to Jordan, with whom he even develops a strong bond.  This itself becomes an obstacle.  It’s much easier to send someone to their likely death when the person is anonymous to you; it’s harder when he or she is a friend.

Jordan is originally drawn to fighting for the Republic because he believes in the ideology and platform.  Yet, as time has passed, his zeal for the cause has waned.  Who is the enemy?  In a civil war, this becomes hard to discern.  Soldiers on either side share the same language, culture, and history.  They raise their weapons against each other, but it’s not as simplistic as it might seem.  In a poignant scene, Hemingway shows a group of Fascists speaking together one evening, speculating on the possibility of an upcoming battle and remarking on the weather.  It is the same conversation the Republicans are having that evening.  Jordan reflects that many of the Fascists aren’t even true Fascists: they were enlisted to fight, but many would rather just be back home with their families, spending life in the ordinary, human way.  And yet these men across the line must die because they are the enemy.

When death is all around you, how does one cope?  Some soldiers turn their sorrow and despair into hatred in order to keep being a soldier.  Jordan remarks that, in order to persevere in his work, he must forget about the people he has killed; he can’t linger on those thoughts.  Anselmo, one of the guerrillas, yearns to atone for the deaths he has caused:

“The killing is necessary, I know, but still the doing of it is very bad for a man and I think that, after all this is over and we have won the war, there must be a penance of some kind for the cleansing of us all.”

While the Republic has abolished religion in name and practice, it cannot wipe it from the souls of the Spanish people. Many of the Republican soldiers still turn to God in the critical moment of death.  One guerilla fighter begins chanting Republican slogans to buoy his spirits as an airplane approaches, about to bomb the place where he lays, trapped and defenseless.  Yet these empty slogans quickly change to prayers.

This, of course, raises the question of religion in warfare.  War—the effort to kill an enemy—is an intrinsically immoral act.  War, quite simply, is never a good thing, though it may be necessary at times.  The taking of another person’s life is always wrong, though circumstances may justify the act.  How can a soldier kill in a moral way?  Is it in one’s mindset?  Though how hard must it be to remember that the man actively trying to kill you is also a beloved son of God!

“I believe in the people and their right to govern themselves as they wish. But you mustn’t believe in killing, he told himself. You must do it as a necessity but you must not believe in it. If you believe in it the whole thing is wrong.”

Robert Jordan has no religious frame of mind and is certain of there being no hereafter, calling the idea “damn foolish business.”  His life is all that he has and, if his life is possibly limited to only these three days before the blowing up of the bridge, then he has to make everything of those seventy-two hours.  For Jordan, having three days to live means making himself emotionally vulnerable by falling in love with Maria and bonding himself to her physically—though, of course, not sacramentally.  But if this world is all that you have to live for, why not?

“The world is a fine place and worth the fighting for and I hate very much to leave it.”

“But you weren’t supposed to live forever. Maybe I have had all my life in three days, he thought.”

Three days.  What if you had three days to live?  How would you live them?  Many might create a “bucket list” and cross off as many fulfilled dreams as possible.  But perhaps three days to live really means three days to get ready to die: three days to put your soul into order, to atone and repent, to pray and prepare yourself, not just for a dismal end to everything, but for the beginning of a perfect eternity.

Posted by Cassandra at 6:21 AM