Lessons from The Three Muskateers

Many might take for their device the epithet of strong, which formed the second part of his [Treville's] motto, but very few nobles could lay claim to the faithful, which constituted the first.  Treville was one of the latter.  His was one of those rare organizations, endowed with an obedient intelligence like that of the dog, with a blind valour, a quick eye, and a prompt hand.

Alexandre Dumas' classic The Three Muskateers follows the adventures of four--not three--men.  The protagonist is the bold, crafty, and ambitious D'Artagnan who aspires to the rank of muskateer.  Then there is the triad of men who comprise the three muskateers reflected in the book's title: Athos, the fatherly figure whose calm, collected wisdom guides the others; Aramis, who yearns to pursue once again his original calling--the priesthood; and Porthos, who is elegantly attired, physically dominating, and a bit slow on the uptake.

These four, along with the other characters, each take a side in the political drama between the King of France (Louis XIII) and Cardinal Richelieu.

Perhaps the best-known and most frequently quoted line from The Three Muskateers is D'Artagnan's statement, "All for one, one for all."  Indeed, it seems that loyalty and faithfulness are the virtues most highly treasured in the world of Dumas' historical romance. 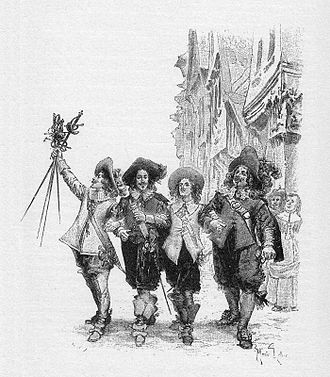 D'Artagnan and the three muskateers pledge their loyalty to the King and his Queen (even when the King himself will not protect her).  And this is how the first major conflict of the book unfolds.

Queen Anne had given her diamond earrings as a loving token to her admirer, the English Duke of Buckingham.  The Cardinal, aware of this and seeking to embarrass the Queen, sets her up by prodding the King to request that she wear the exact earrings at a ball to be held in her honor.  The Queen desperately needs the earrings back in time or her romantic involvement with the Duke will be exposed.

D'Artagnan springs into action, along with the three muskateers who, without so much as hearing the purpose of the adventure, willingly risk their lives (and take the lives of others) to enable D'Artagnan to obtain the earrings back from the Duke.

This was precisely the point at which I seriously reconsidered my dedication to completing the novel.

Loyalty is an outstanding virtue, but where should our loyalty ultimately lie?

It was difficult for me to rally behind D'Artagnan and the muskateers when their quest was based on loyalty to a Queen who was not loyal herself.  They were defending her honor, but how was she honorable?  She was defiling her marital vows by entanglement with another man--not to mention a man from enemy country.

This carte blanche of faithfulness, when bestowed upon another (fallible) human, is not always virtue, but instead the opposite: a means of vice.

Thankfully, the second half of the book was much more gripping and offered more gravitas than exploits involving a set of earrings.  Dumas introduces the principal villain: a stunningly beautiful woman and Cardinalist spy who goes by the alias of Milady.  She is a fascinating character: eerily malicious, vengeful, and master of deceit.

"You are not a woman," said Athos, coldly and sternly; "you do not belong to the human species: you are a demon escaped from hell..."

D'Artagnan becomes involved with her when, his romantic advances rejected, he poses as Milady's true lover and sleeps with her, under of pretense of being someone else.  The episode leads to D'Artagnan learning a condemning secret about Milady and her subsequent efforts to seek revenge.

Milady dreamed that she at length had d'Artagnan in her power, that she was present at his execution, and it was the sight of his odious blood, flowing beneath the axe of the executioner, which spread that charming smile upon her lips.

What role does honor serve here?  D'Artagnan risks his life to protect the Queen's honor, yet he does not pause when he defaces Milady's honor by taking advantage of her in the worst way possible?

It is one of many examples of the ambiguity and inconstancy of honor in The Three Muskateers.  But when you are not living by an overarching, unchanging timeless Truth...everything becomes ambiguous.

In this romantic world Dumas has created, what is the end result of the faithfulness promised by the muskateers to each other?  What is the result when people pledge the ultimate loyalty to each other?

Dissolution.  It was a very somber ending.  The unity was broken, each muskateer going his own way.

Faithfulness is best when grounded in the unchanging Faith.

D'Artagnan lauded, "All for one, one for all!"  But perhaps the better refrain is simply: "All for One."  We owe our loyalty and faithfulness to God and through His light we can best see how to honor others.

Posted by Cassandra at 8:08 PM