Lessons from The Robe

If you believed that Jesus' supernormal power could heal the physical and mental sickness of those who merely touched his Robe, by what reasoning do you disbelieve that he could still a storm?  Once you impute to him supernormal power, what kind of impertinence consents to your drawing up an itemized list of the peculiar things he can and cannot do?  Yet this storm story was too, too much! ... This is an inanimate, insensible tempest!  No human being--however persuasive--could still a storm!  Concede Jesus that power, and you admit that he was divine!

Lloyd C. Douglas, a Lutheran minister, wrote The Robe in 1942.  It enjoyed immediate, widespread success, holding the number one spot on the New York Times Best Seller List for more than one year.  It was later made into a motion picture in 1953.

The robe from which the novel derives its title is the simple, seamless piece of apparel that belonged to Christ.  It falls into the possession of tribune Marcellus Gallio, who wins it while gambling with the other Roman soldiers at the foot of the cross.  Marcellus, in charge of the crucifixion of Jesus, is disturbed by the deed, especially when he realizes that he has put to death an innocent man. 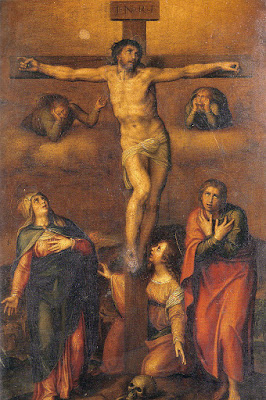 Later that day, at a banquet hosted by Pontius Pilate, a depressed Marcellus is cajoled into donning the dead Galilean's robe in a display of mockery.  He reluctantly does so and immediately is overcome with a mental paralysis.  He blankly asks of those around him, "Were you out there?" as the scene at Golgotha haunts him.

Aided by his loyal Greek slave, Demetrius, Marcellus seeks to recuperate in Athens, but is driven near to suicide.  At the last moment, it is the Robe itself that heals Marcellus: laying his hands upon the Robe restores his peace of mind and heart.

Yesterday afternoon, its touch had healed his wounded mind.  How was he to evaluate this astonishing fact?  Perhaps it was more simple than it seemed: perhaps he was making it all too difficult.  He had shrunk from this Robe because it symbolized his great mistake and misfortune.  Now--compelled by a desperate circumstance to lay his hands upon the Robe--his obsession had vanished!  Was this effect purely subjective--or was the Robe actually possessed of magical power!

The act of carrying out a death sentence is enough to cause a nervous breakdown...but why was it only after putting on the Robe?  And how could the same Robe later fully restore him?  Marcellus is at a loss and undertakes a mission to Jerusalem and Galilee to learn more about this Jesus.

The bulk of the novel follows Marcellus' journey to faith.  Along the way he meets some of the apostles and recipients of Christ's healing power--including the woman with the bleeding who merely touched Christ's Robe and was healed.  At first Marcellus accepts Jesus as a wise teacher and new kind of leader who could usher in a kingdom of peace and brotherhood, so unlike the Roman Empire.

But how to explain these miracles?  He himself experienced the power of the Robe.  He could not deny his own inexplicable healing.  Where does one draw a line...can you draw a line?  If Jesus can physically heal people, why not tame the tempest?  And if He can calm the wind and waves, what else must He be but divine?

Marcellus is gradually led into greater knowledge of Christ: teacher, healer, savior.  For a long time, Marcellus assumes that Chris is dead; indeed, why would he think otherwise?  Then as his understanding and acceptance deepen, the Christians inform him: Christ is alive!

We know Christ's story.  In some ways, the familiarity of that story is a danger.  At times, I forget how astounding it is.  A person, dead in a tomb...resurrected!  God killed on a cross and alive once again.  Marcellus' baulking at the incredibleness of it was refreshing.

It is a reminder of His presence, too.  The Robe is a story about the person of Christ and how His presence changed people--sanctified and redeemed them.  These were people who sat with Him, heard His voice, broke bread with Him, got into a fishing boat with Him...

How powerful the personality, the aura of Christ!  When Chris and I were on our honeymoon, we were blessed to meet the Prelate Bishop of Opus Dei, Javier Echevarria (may his soul rest in peace).  When he walked into the room, I immediately felt something.  I could feel the grace emanating from him.  His presence was powerful; he radiated Christ.  I can only imagine the effect Christ Himself had on those He saw and touched and spoke to.  Well, we know, don't we?  They left everything...everything...to follow Him.

Simon Peter asks Marcellus how he knew Jesus.  Marcellus' succinct reply: "I crucified him."  In the end, Marcellus pays his debt: he gives his life for Christ, witnessing to the Christian faith before the emperor.  Once he had faith, he had to act upon it, even if it meant martyrdom.

As I typed my notes in preparing to write this post, I reflected that Douglas had to end his novel this way.  Marcellus crucified Christ; in return, Marcellus gives up his earthly life for Christ.  Then it struck me: I crucified Christ.  My sins were the nails driven into his flesh and the sword that struck His side.  It was me.  And in a sense, I--baptized, raised in the faith, recipient of sacramental grace--have much more culpability in knowingly committing my sins than Marcellus who was ignorantly following a command.

I have a debt to pay.

The Emperor Tiberius comments about the Christians:

'There's more than one kind of courage, my child,' he soliloquized, 'and the most potent of all is the reckless bravery of people who have nothing to lose.'

Am I that brave?  Am I ready to die for Christ?  If I truly know Him in the deep, intimately personal way that the apostles did--then what is there to lose?

I believe Lord!  Help my unbelief!
Posted by Cassandra at 8:05 PM