Lessons from Till We Have Faces

When the time comes to you at which you will be forced at last to utter the speech which has lain at the center of your soul for years, which you have, all that time, idiot-like, been saying over and over, you'll not talk about joy of words.  I saw well why the gods do not speak to us openly, nor let us answer.  Till that word can be dug out of us, why should they hear the babble that we think we mean?  How can they meet us face to face till we have faces?

C.S. Lewis considered Till We Have Faces his best work.  His good friend and fellow author, J.R.R. Tolkien, concurred.  I am of the same opinion myself.  This was an incredible book!

Till We Have Faces is a reimagining of the myth of Cupid and Psyche.  Though a myth, never once does the narrative seem false--Lewis brings the story alive with fascinating details about this fictional place and its customs.

Lewis sets his book from the perspective of Psyche's older sister Orual.  It is Orual's written accusation against the gods, full of bitterness and resentment.  Lewis began writing the book as an unbeliever; 30 years later he finished the book as a believer.  The spiritual conversion he underwent in that course of time is reflected in Orual's own journey.

Orual is determined to set out a clear indictment against the gods for their injustice toward her.  The substance of her grievance concerns her youngest sister Psyche, who is as astonishingly beautiful as Orual is appallingly ugly.

Glome, the fictitious city-state that their harsh and unloving father rules as King, has been suffering calamity upon calamity.  The priest of the house of Ungit, the local god who also goes by the name of Aphrodite in Greek, asserts that a human offering must be made to the gods to restore good will upon the land.  The offering must be the very best--pure, good, lovely.  It is Psyche.

Orual, who has raised Psyche almost like a daughter, is beyond tormented.  Her sister, however, is strangely at peace, explaining to Orual that she has often longed to live on the mysterious mountain that belongs to the god ... that she has felt a pull to that home.

After the great offering, Orual enlists the help of one of the king's soldiers (Bardia) to travel to the tree upon which Psyche was chained and believed to have died.  (There is, of course, overt symbolism of Christ here.)  Orual expects to find bones, but to her great joy and astonishment, she travels into the nearby valley and finds Psyche, alive and well--in fact, even better than she has ever seemed!

Orual is mystified and even more so as Psyche relates her tale: the god of the mountain has chosen her as his wife and they live together in an amazing palace.  Orual questions who this god and husband is, but her sister cannot say more than that he is wonderful and good.  He has commanded her not to see his face and comes only in the dark of night.  Psyche embraces the sacred mystery; she trusts in the goodness of this god. 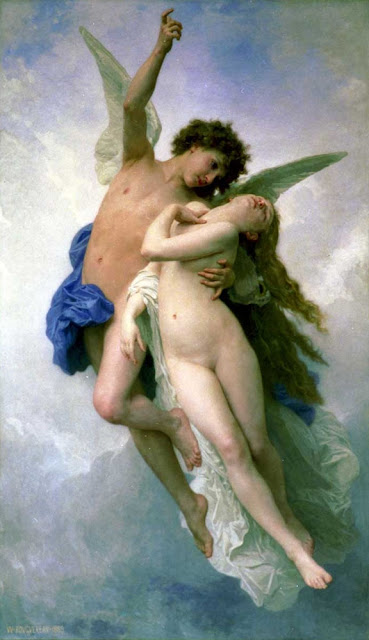 Orual, who complains about the darkness of holy places, wants concrete, definite, and defined.  She does not trust.  Considering her sister mad, asks to see this great palace.  Psyche stares at her, her face aghast with disappointment and grief.  It was there, where they sat.  They were in the palace.  But Orual could not see it.

For the world had broken in pieces and Psyche and I were not in the same piece.  Seas, mountains, madness, death itself, could not have removed her from me to such a hopeless distance as this.  Gods, and again gods, always gods...they had stolen her.  They would leave us nothing.

Faith can be divisive.  It can turn "man against his father, a daughter against her mother..." (Matthew 10:35).  For Psyche, she did not need to see her god's face: his love was clearer and more certain to her than anything else.  Yet, Orual could not see, no matter how much Psyche explained or reassured her.

Faith is indeed a gift--one needs to have an open heart and soul to receive it.  No matter how hard one might try, you cannot make someone see God, even though He is all around and within.  The sight comes only from faith and sometimes one has to tread through great pain and sorrow to be able to finally see.

As she departed, Orual thought she could almost discern the outlines of a palace in the distance, but quickly dismissed these fantasies.  There had to be another explanation.  Fearing her sister the prey of some vile mountain men, Orual developed her scheme.  She would save Psyche, even if to do so, she had to kill Psyche herself.

Those who love must hurt.  I must hurt you again today.  And, Psyche, you are still little more than a child.  You cannot go your own way.  You will let me rule and guide you.

So Orual returned to the valley and lay a bitter choice before Psyche.  Either Psyche would take a lamp and light it before her husband that night to reveal his true identity, or Orual would commit suicide.  In great anguish, Psyche took the lamp and agreed to betray her husband's trust.

You are indeed teaching me about kinds of love I did not know.  It is like looking into a deep pit.  I am not sure whether I like your kind better than hatred.  Oh, Orual--to take my love for you, because you know it goes down to my very roots and cannot be diminished by any other newer love, and then to make of it a tool, a weapon, a thing of policy and mastery, an instrument of torture--I begin to think I never knew you.  Whatever comes after, something that was between us dies here.
Shortly after, the valley is torn asunder by driving rain, thunder and lightning.  Psyche--like Eve in the Garden--is banished from the valley and her god, set forth to labor and toil.  Orual is separated from Psyche and set for her own life of suffering.

Though Orual eventually became Queen of Glome--and an exceedingly successful one at that--her life is empty.  She wears a veil over her ugly face, hiding the truth of her emotions and locking her heart from love.

My second strength lay in my veil...the wildest stories got about as to what that veil hid.  No one believed it was anything so common as the face of an ugly woman... The best story was that I had no face at all, if you stripped off my veil you'd find emptiness.

All the while, her bitter rage against the gods simmers.  When Orual hears her experiences with Psyche retold as myth by a stranger--with herself cast as a jealous sister envious of Psyche's joy and love--Orual determines to set the story straight.

As her narrative ends though, a new, unexpected one begins.  For in the midst of "lifting the veil" of her heart and allowing the memories and emotions to return, Orual begins to see things a little differently than she had remembered.  The process of writing is a process of re-seeing her past, and her part in it.

Orual had resented the gods--Ungit in particular--because she believed the god snatched people and used them for her own good selfishly.  What writing her complaint against the gods makes Orual realize is that she, herself, is Ungit ... or, at least, who she believes Ungit to be.

Orual used people for her own personal pleasure and good.  She seized Psyche's love and wanted it exclusively.  She had similarly used her mentor and Bardia, whom she secretly loved.  When Bardia dies, exhausted from tireless, selfless service from the demanding Queen, it is his widow who reveals the deformity of Orual's love:

Oh, Queen Orual, I begin to think you know nothing of love.  Or no; I'll not say that.  Yours is Queen's love, no commoners'.  Perhaps you who spring from the gods love like the gods.  Like the Shadowbrute.  They say the loving and devouring are all one, don't they?...You're full fed.  Gorged with other men's lives, women's too: Bardia's, mine, the Fox's, your sister's--both your sisters'.

Orual's love was a selfish, consuming love.  Finally, through a series of visions, Orual comes to realize that the blame her accusation rests on falls upon her.  Why had the gods not answered her?  Why had they been silent?  Why were holy things in dark places?

In order to really speak with God, we must take off our veils.  We must speak with him "face-to-face"--stripped of our pretentiousness and pride.  If God seems silent, it might be because we are talking to ourselves, about ourselves.  With our masks off, we can look upon Love.

I know now, Lord, why you utter no answer.  You are yourself the answer.  Before your face questions die away.  What other answer would suffice?