Lessons from A Tale of Two Cities

Along the Paris streets, the death-carts rumble, hollow and harsh.  Six tumbrils carry the day's wine to LaGuillotine.  All the devouring and insatiate Monsters imagined since imagination could record itself, are fused in the one realisation, Guillotine.  And yet there is not in France, with its rich variety of soil and climate, a blade, a leaf, a root, a sprig, a peppercorn, which will grow to maturity under conditions more certain than those that have produced this horror.  Crush humanity out of shape once more, under similar hammers, and it will twist itself into the same tortured forms.  Sow the same seed a rapacious license and oppression over again, and it will surely yield the same fruits according to its kind.

It is a novel much about death, but it left me pondering most about life.

A Tale of Two Cities is Charles Dickens' 1859 novel about the French Revolution.  The plot centers around the Mannette family: patriarch and ex-political prisoner Dr. Manette, his devoted and virtuous daughter Lucie, and her husband Charles Darnay.  Darnay is a French aristocrat who has denounced his heritage, tainted with the blood of abused peasants, and moved to England where he works for his living.

While in England, the family befriends Mr. Sidney Carton.  Similar to Darnay in appearance, Carton contrasts him most strongly in personality and disposition.  Carton should enjoy the same pleasures and contentment in life as Darnay, but he does not.  Instead, Carton aimlessly passes his life in lost opportunities and lack of ambition.  His life is one of "could have beens."

Climbing to a high chamber, in a well of houses, he threw himself down in his clothes on a neglected bed, and its pillow was wet with wasted tears.  Sadly, sadly the sun rose; it rose upon no sadder sight than the man of good abilities and good emotions, incapable of their directed exercise, incapable of his own help and his own happiness, sensible of the blight on him, and resigning himself to let it eat him away.

Though the family and friend live in England, France and its growing unrest is not far from them.  When Darnay learns that the just man who acted as a servant for his malevolent, aristocratic uncle has been jailed by the patriots, guilt weighs upon him.  Darnay has renounced all the evil in his family's past, a past that habitually preyed on those less fortunate; however, Darnay's relocating to England has not righted the wrongs committed.  And here is a concrete plea for help, directed at Darnay, the sole person (as inheritor of his family's estate) able to do so.

With that intent in mind, Darnay returns to France and quickly finds himself imprisoned, with no trial, for breaking a law he did not realize even existed.

Dr. Manette, Lucie, and Sidney Carton soon arrive in Paris, in the effort to free Darnay before he, like countless other innocents, is brought before the guillotine.  There, the French women peasants knit as they gaze upon the scene, goading on the instrument of death that will exterminate a class that so often starved, raped, stole, imprisoned, and murdered them.

It  [the guillotine] was the sign of the regeneration of the human race.  It superseded the Cross.  Models of it were worn on breasts from which the Cross was discarded, and it was bowed down to and believed in where the Cross was denied.  It sheared off heads so many, that it, and the ground it most polluted, were a rotten red.  It was take to pieces, like a toy-puzzle for a young Devil, and was put together again when the occasion wanted it.  It hushed the eloquent, struck down the powerful, abolished the beautiful and good. 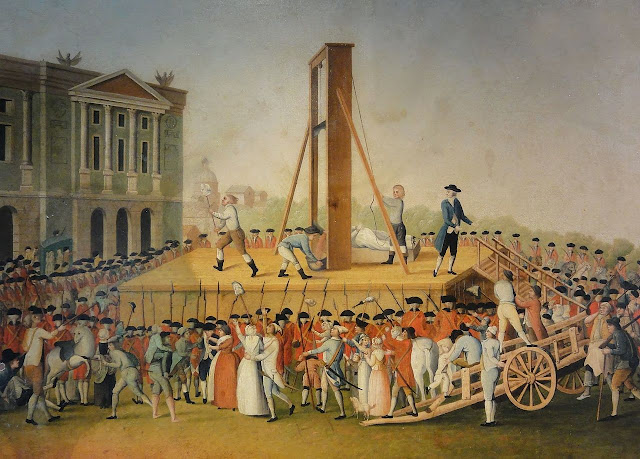 Death is everywhere.  Blood marks the weapons sharpened at the grindstone.  Blood stains the shoes that dance the Carmagnole, the hideous mockery of dancing that revealed "how warped and perverted all things good by nature were become."  Blood flows in the streets like wine, broken from its cask, which the starving people feverishly collect and greedily consume.

There is darkness and terror, even more frightening for the reader because it is true.  Yet, amid this, Dickens draws forth the theme of life.

The first book of the novel is entitled "Recalled to Life."  Dr. Manette, a prisoner for eighteen years in the Bastille, has been freed, but is a shadow of his former self.  He sits, making shoes, withdrawn and unengaged with the world around him.  He lives, but not really.

It is his daughter, Lucie, and her unswerving, ardent devotion and love that bring him back to life.  As the book progresses, Dr. Manette develops from a weak victim to a strong advocate in fighting for his son-in-law's freedom.

Most powerfully, however, is Sidney Carton's recall to life.  Before the return to France, while they still reside in a serene home in England, Carton visits Lucie and confides to her that he loves her, though he realizes she should never return the sentiment toward him: he is undeserving of it.  Yet, he wants her to know that she has inspired him to consider striving for something higher...though that inspiration will have little bearing in reality.  Before he leaves her, Carton tells Lucie:

"...think now and then that there is a man who would give his life, to keep a life you love beside you!"

When Darnay is sentenced to the guillotine, Carton employs his ingenuity to devise a means to save his life.  Taking advantage of their similar appearances, Carton takes the place of Darnay, sacrificing himself for Lucie's love.

He dies and, in dying, he finds Life--everlasting Life.

Carton's sacrifice of his life gives hope that anyone may be recalled to Life.  Amid the great darkness of mob brutality and capital punishment, Dickens places the moment of triumph and victory.  It was the worst of times; it was the best of times.

There is the foil of Lucie, weaving her golden thread of love and mercy, and Madam Defarge, knitting her record of aristocrats targeted for death, who is filled with revenge and hate.  Yes, even a Madam Defarge may be recalled to life.

Dichotomies abound in A Tale of Two Cities, but the darkness does not diminish the light.  It helps one understand the evil, recognize and name it, in order to resist it.  We are all capable of it.  The guillotine has come in many forms throughout history; we have crucified God, haven't we?

But the same God calls us to Life and Carton, moments before his death, could foresee a time with the streets of Paris would be free from blood, when Lucie's son who would bear his name could stand there in peace and freedom, remembering Carton's sacrifice.

We can foresee a time, too, when there will be no fighting, no war, no more death--when we will all be recalled to Life.
Posted by Cassandra at 8:15 PM