Lessons from The Snake Pit

He was living in sin, there was no doubt of that, so long as he made no offer to atone for that unhappy deed, but God must know that he could not; he could not jeopardize the welfare and honour of his wife and child.  In all else he had endeavored to walk as a Christian man.  And God must know even better than himself how unspeakably he longed to live at peace with Him, to be allowed to love Him with his whole heart, to bend the knee in prayer, without grieving at his own disobedience.

When Olav Audunsson finally can claim his ancestral home of Hestivken, he recognizes a wooden carving on one of the doorposts leading into the bedroom.  It has been many years since Olav has last been at Hestivken, but the image is immediately familiar.

It is the depiction of a man, surrounded by writhing snakes, coiling all about his limbs and body.  One snake sinks its venomous fangs into his heart. 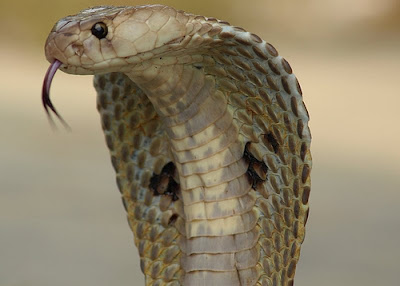 If this strikes you as a bad omen at the start of Sigrid Undset's second book in her tetralogy, you would be correct.

The Snake Pit continues the story of Olav and Ingunn.  After all their heartache and extended time of separation during the first book of the series, they are at long last joined as husband and wife at Hestviken.

The problem, of course, is that they are joined by a third: the demons that are their sins.

It came over him that now he understood one thing: a conflict had been waged in the whole of creation since the dawn of the ages between God and His enemy, and all that had life, soul, or spirit took part in the fight in one host or the other, whether they knew it or not--angels and spirits, men here on earth and on the farther side of death...But now Olav himself had to choose whether he would serve in one army or in the other.

Olav bears the secret burden of the murder of Teit, the man with whom Ingunn bore an illegitimate child.  Under the laws of the time, Olav's act would have been justified considering Teit seized upon another man's betrothed.  However, Olav had remained silent following the murder, secretly burning Teit's body in a small wayside shelter, hoping people would assume the building had accidentally caught on fire.

Now the unconfessed sin burns within him and the poison of that evil deed seeps into Olav and Ingunn's life together.

Ingunn and Olav are expecting their first child, but Ingunn can only think that this is not her first child.  Eirik, the son she conceived with Teit, is being raised by an unknown foster mother far away in the north.  Ingunn remembers with a guilty pain the hours after Eirik's birth, when the only thing that could assuage his shrill cries was the comfort of her breast--his mother.  Now where was he?  Was he still crying out for her?

Ingunn's pregnancy ends with a still birth.  She conceives again and again, each time facing a miscarriage.  The failed pregnancies leave her physically ravaged, unwell, and despondent.

She must be marked in some mysterious way, with something as terrible as leprosy, so that she infected her unborn infants with death.  Her blood and marrow were spent, her youth and charm wasted long ago by these uncanny guests who lived their hidden life beneath her heart for a while and then went out.  Till she felt the first warning grip as of a claw in her back, and had to let herself be led by strange women to the little house on the east of the courtyard, give herself into their hands without daring to show a sign of the mortal dread that filled her heart.  And when she had fought through it, she lay back, empty of blood and empty of everything--the child was as it were swallowed up by the night, taken back into a gloom where she had not even a name or a memory to look for.

Olav magnanimously retrieves Ingunn's young son, Eirik, and brings him to Hestviken.  They tell their neighbors that Eirik is their firstborn, hidden away until that time because Olav had been an outlaw when the child was conceived.  Ingunn is ecstatic to hold her child again, but Olav is haunted by the realization he has falsely given his entire birthright to a boy who--in the eyes of the law--is entitled to absolutely nothing at all.

Olav and Ingunn manage to have a child of their own, a little girl named Cecilia, but shortly thereafter Ingunn's health fails worse than ever before.  She has lost any strength in her limbs and lies in bed, her back covered in oozing bedsores.

Olav kisses her wounds, recalling to mind how holy men would kiss the sores of lepers, hoping to bring about healing.  He reflects that here, however, the positions are reversed.  Ingunn, quietly and uncomplainingly bearing her suffering, has atoned for her misdeeds.  Olav is the leper, the one in need of the greatest healing.

He feels himself powerless, however.  For his actions, Olav would need to confess to the bishop.  His penance would most likely be public, a formal declaration to everyone of his actions.  He may be required to go on a long, dangerous pilgrimage to atone for his evil deed.  All of this would yet again bring a wave of guilt and shame upon Ingunn.  Not to mention that everyone would know Eirik's true identity.  To confess his sin would bring pain to his wife and child.

"I cannot condemn her to be left alone, poor and joyless and broken in health, the widow of a secret murderer and caitiff...Too much is at stake for those whom it is my duty to protect.  Then all that I have done to save her honour might as well have been undone.  Think you I did not know that had I proclaimed the slaying there and then, it would have been naught but a small matter?--the man was of no account, alive or dead, and had you then backed me and witnessed she was mine, the woman he had seduced--But Ingunn would not have been equal to it--she could face so little always--and then is every mother's son in these parts to hear this of her now that she is worn out--?"


Then one evening Olav is away for business and word is brought to him that Ingunn is on her deathbed.  Olav and an acquaintance who offers to loan him his horse make their way through the church on their way out.  Olav is struck by the crucifix hanging in the empty, dark church.

He knows that Ingunn is laying on her deathbed, but what is directly before his eyes is the suffering of Christ.

Every sin he had committed, every wound he had inflicted on himself or others, was one of the stripes his hand had laid upon his God.  As he stood there, feeling that his own heart's blood must run black and sluggish in his veins with sorrow, he knew that his own life, full of sin and sorrow, had been one more drop in the cup God drained in Gethsemane.  And another sentence he had learned in his childhood came back to him: he had believed it was a command, but now it sounded like a prayer from the lips of a sorrowing friend: Vade, et amplisu jam noli peccare--[Go and sin no more].

Olav sacrifices much for Ingunn and Eirik.  Yet all his efforts have, in many ways, been futile.  Ingunn's life has been one of immense suffering and loss--perhaps, one may speculate, because Olav did not right the wrong he did, but instead allowed it to fester and breed further sins.

By failing to confess his mortal sin, Olav was by extension choosing to serve in the army of God's Enemy.  His heart was bitten by the ancient serpent and, no matter how much he struggled to help his family, he was poisoned with his sin.