"She had been a servant of God--a stubborn, defiant maid, most often an eye-servant in her prayers and unfaithful in her heart, indolent and neglectful, impatient toward admonishments, inconstant in her deeds.  And yet He had held her firmly in His service, and under the glittering gold ring a mark had been secretly impressed upon her, showing that she was His servant, owned by the Lord and King who would now come, borne on the consecrated hands of the priest, to give her release and salvation."

As she lay on her deathbed, her life slowly sapping from her as the bubonic plague ravaged her body, Kristin Lavransdatter realized that there were only two possessions she retained in these final hours of life.  One was the golden cross given to her by her beloved father, Lavrans.  The other was her wedding ring. 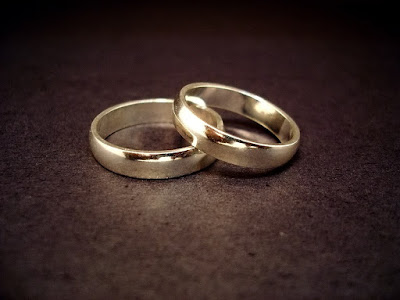 As Kristin removed her wedding ring, to give away as a donation for Masses for the dead, she saw that the ring had left a mark on her finger: a white band and the faint sketch of an M, from the center of the ring which bore a symbol of the Blessed Mother.

How very fitting, then, that the final book in Sigrid Undset's series about Kristin is entitled The Cross.  For Kristin, marriage most of all came in the form of the cross.  But, in the end, it is this cross that most humbles her and grants her self-knowledge to realize her own transgressions and, thus, her need for a Savior.


It in in their marriage that Kristin and Erlend's worse traits become most obvious.

Erlend, found guilty of treason, has been stripped of any royal dignity and all property.  He and Kristin and their seven sons must move to Kristin's ancestral property, where Erlend is most definitely the outsider.  Despite his repeated blunders and their subsequent grave consequences upon his family, Erlend doesn't seem remotely concerned.

On the contrary, he effuses a constant, carefree youthfulness. The past and its ghosts seem to have no hold on Erlend.  As Simon, Erlend's brother-in-law who had originally been betrothed to Kristin, remarked,

He [Simon] had revealed to Erlend something that he found more bitter than death to recall whenever it entered his thoughts.  And yet Erlend behaved toward him as if he had understood nothing and remembered nothing.  It didn't seem to trouble the fellow at all that he had wreaked havoc with another man's life.

Kristin, in sharp contrast, cannot seem to stop worrying about her family and the dubious future of her sons, given their father's fall from reputable society.  She, perhaps in reaction to Erlend's nonchalance, is overly protective and cautious of their growing boys.

She joins the servants in toiling hard on their manor and she prides herself on her diligence, in contrast to her relaxed husband.  Meanwhile, the bitterness in her heart toward Erlend grows.

But he hadn't betrayed her; he had merely failed her again and again and made her life full of anguish and uncertainty.  No, he had never betrayed her, nor had he ever made her feel secure.  And she could see no end to it all.  Here she stood now, about to beg him to come back, to fill her goblet each day with uncertainty and unrest, with expectations, with longings and fear and hope that would be shattered.

Erlend seems most to blame for the troubles in their marriage and certainly it seems so in the eyes of Kristin.  However, the latter has similarly played her role in the weakening of their union.

To outward appearances, Kristin appears the more pious and virtuous of the two.  She attends Mass regularly, visits with priests, goes on pilgrimages, and prayers daily.

But it in in the heart that God will judge one and it is here that Kristin's sin lies.

But deep in her heart Kristin felt that she had not forgiven Erlend.  She could not, because she would not.  She held on to her bowl of love, refusing to let it go, even though it now contained only these last, bitter dregs.  The moment when she left Erlend behind, no longer thinking of him even with this corrosive bitterness, then everything that had been between them would be over.

Erlend's sins are very much exterior.  They are quite obvious, sometimes painfully so.  But in many ways, perhaps they are even excusable.  He was poorly raised, with few good examples set before him.  When he betrays Kristin, it is he who suffers the most with great remorse and regret.  Though his actions are wrong, his heart is actually quite pure.  As Kristin eventually realizes:

He never held on to anger or injustice any more than he held on to anything else...I'm certain that God the Almighty knows that Erlend never harbored rancor toward any man, for any reason.

But Kristin's heart is cold and hardened toward her husband.
It is only on his deathbed that Erlend and Kristin reconcile after a long period of separation.

It is in the cross of their marriage that Kristin's eyes are eventually open to a deep truth: it is only through self-knowledge and an honest evaluation of one's personal defects, faults, and transgressions that one can look upon one's neighbor.

Kristin perceives that her father, a pious, gentle, and forgiving man, was able to react in the charitable and generous manner in which he consistently did--not because he couldn't see other's faults--but because he had searched his own heart and had seen the darkness lying within himself.

Her father's marvelous gentleness was not because he lacked a keen enough perception of faults and wretchedness of others; it came from his constant searching of his own heart before God, crushing it in repentance over his own failings.

For most of her marriage, it was Erlend's transgressions and failings that brought Kristin sorrow.  But as she ages and reflects upon her life, she simultaneously sees that it is also Erlend and their marriage that brought her the most joy.  She realizes, too, that he had always been a part of her--in days of sorrow and strife, as well as days of peace and happiness.  She knew that she belonged to him and this knowledge never left her.

Marriage is a cross.  It is a daily dying to self, in order to live for, to serve, and to sanctify the other.  Marriage requires humility: deferring out of patience and respect to one's spouse--sacrificing one's personal preferences, goals, and desires for the good of the other.

Marriage is a cross in bearing the other's vices and faults, but simultaneously never excusing or accepting them; instead, it is the goal of each spouse to sanctify the other, to challenge each other to rid the soul of sin and to grow each day in holiness.

Kristin claimed Erlend for her own--against reason, against her morals, against the honor and wishes of her parents.  Their marriage, founded in sin, was bound to produce the fruits of sin.

She had grumbled because the father of her children was such an unreliable man, who gave so little thought to the descendants who would come after him.  She always forgot that he had been no different when she broke God's commandments and trampled on her own family in order to win him.

But God uses these misjudgments and sins to teach us and the days of her marriage became to Kristin daily lessons in suffering and sanctification, fall and redemption.

Posted by Cassandra at 1:26 PM