Lessons from Kristin (Part I)

"But for you it won't be the same as if you had never possessed me."

For as long as I could remember, in those final few moments of consciousness before drifting off to sleep, I would envision the day I longed for and imagined: my wedding day.

I shared this once with someone, who then questioned why this particular dream would be the one that captivated my imagination on a daily basis.

It seemed so clear to me.  To have found that someone who I loved with all of my heart and to become one with him in every way possible--as long as we both should live--was the hope that kept me searching for my true love...all the way until May 23, 2009 when we became husband and wife.

The trials and angst of searching and finding love are timeless.

Perhaps that is why I haven't been able to put down the trilogy by Sigrid Undset, a Nobel Prize winner in literature.  Kristin Lavransdatter is set in fourteenth century Norway, a time so very different from our own: a culture absolutely imbued with the Catholic faith, where one is bound by strict social rules, and daily life revolves around the manor.

Kristin is the adored daughter of her upright father, Lavrans, who has arranged for her marriage to a very respectable young man named Simon.  While the marriage makes sense in just about every way, Kristin does not love him.  A willful and passionate woman, Kristin's decision not to marry Simon is solidified when she becomes acquainted with dark-haired, alluring Erlend.

Despite her betrothal to Simon and Erlend's promiscuous past, Kristin falls in love with Erlend--a love that is intensely passionate and zealous...so much so that, while still betrothed to another man, Kristin gives herself completely to Erlend.

They are physically intimate on several occasions and, after finally securing Lavran's approval for their marriage (a very difficult feat), Kristin discovers she is pregnant--months before their marriage is to take place.

There is a powerful scene shortly after Kristin's realization about her pregnancy where a bolt of lightning strikes their parish church, which at that time was the very center of medieval society.  The church is destroyed in flames and Erlend suffers facial burns in the process.

It's a perfect representation of a major theme and lesson from the first part of this trilogy.

Kristin and Erlend are consumed with love each one another, but their love is misdirected.  It overpowers Kristin's ties to her family and even her moral code.  As they give in to their passion, they receive pleasure from the other, but simultaneously they cause misery to their family and friends...and to themselves as well.

Fire contained is useful, enjoyable, and purposeful.  Unquenchable fire is destructive and deadly. 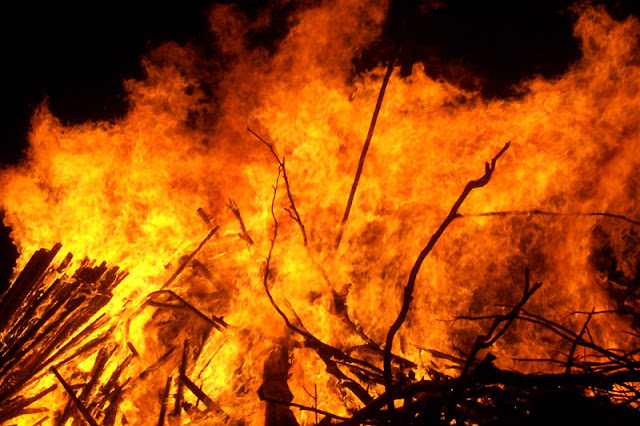 Erlend often spoke to Kristin about the day they would one day marry, once they were able to straighten things out with her family.  Yet, Kristin knew his vision of how things would be was not compatible with the reality he was creating through his actions.

"Erlend would be ridiculed too, just as much as she would be, or more [once their pregnancy was realized]...But he was the one who wanted this wedding, he wanted to see her as a bride wearing silk and velvet and a high golden crown; he wanted that, but he also wanted to possess her during all those sweet, secret hours.  She had acquiesced to everything...And in the end, no doubt, he would realize that no one could have both."

No, no one can have both--neither in the 14th nor the 21st century.  One cannot give oneself physically to another before they are joined at the altar and expect the wedding day of one's dreams because, as Undset weaves throughout her novel, one's wrongful actions have consequences.

Kristin and Erlend's transgression of fornication wrought devastation on their family and on the very love that prompted their misdeeds.

As Undset describes their wedding banquet,

"She [Kristin] sat there, unable to get warm.  Her cheeks began to burn and shivers of cold ran down her spine...Every time the bridegroom drank a toast to her, she had to look at the red blotches and patches that were so evident on his face now that he was warming up after the ride in the cold air.  They were the marks of the burns from the summer."

Kristin and Erlend were married in the Church, but they were married when in a state of severe sin.  The wedding day both of them had hoped for, they had made impossible.  Erlend's face was marked by burns from the fire, but even worse was the mark of sin upon his soul.

When thinking of their upcoming wedding, Kristin at one point remarks to Erlend, "But for you it won't be the same as if you had never possessed me."

The wedding night is intended to be the consummation of the vows of husband and wife, a definitive joining of two becoming one.

But when that intimacy has already happened before marriage...the meaning of the physical union has been diluted and sin has tainted the couple's ability to truly love each other.

It calls to my mind a quote by St. Josemaria Escriva:

"'Purity?' they ask.  And they smile.  They are the ones who go on to marriage with worn-out bodies and disillusioned souls."

So often I found myself exasperated with Kristin.  Oh, I could understand her feelings.  I, too, remember what it was like to be madly in love, where the mere mention of your beloved's name brings a warmth to your soul and a flutter to your heart.

But as I read on and watched Kristin sink further and further into sin--grasping for love, but compromising for pleasure--I felt such sorrow for her.  Regardless of culture, time, or place, sin always works the same way: it is a downward spiral.  Yielding once will lead to another moral dismissal and then to another.

"What do you think of this ruse?" he [Erlend] asked quickly, in a low voice.  "Do you think I've done wrong? But I had to talk to you."

"It won't do much good for us to think about what's right and what's wrong," said Kristin.

It isn't until she is kneeling before God, exchanging her wedding vows, that Kristin realizes the gravity of her actions.

Kristin and Erlend's relationship tells the truth that, despite all one's efforts, the wedding of one's dreams cannot take place with worn-out bodies and disillusioned souls.

Fortunately, this is only the first book in the trilogy.  There is always hope for Kristin and Erlend--and us, too--for repentance, conversion, and redemption.
Posted by Cassandra at 3:49 PM