Lessons from The Count

If you could magically possess any one of God's characteristics, which would you choose?

There are some heavy contenders: all-powerful, all-knowing, all-good, existing outside of time...

I would probably choose the one quality that is definitional when it comes to God, which is being able to love perfectly.

But for Edmond Dantes, protagonist of Alexandre Dumas' classic The Count of Monte Cristo, it is God's justice he admires and, in facts, seeks to dispense.

"...I betrayed, sacrificed, buried, have risen from my tomb, by the grace of God, to punish...He sends me for that purpose, and here I am."

The Count of Monte Cristo was published serially from 1844-1846 and truly reads like the forerunner of today's soap operas.  Dumas weaves an intricate plot with many characters, who share surprising and intricate relationships with one another.  Within the pages of the book you'll find assassinations, extramarital affairs, political schemes, character disguises, suicide attempts, and even some secret treasure.

While taking the prize for being the longest book I have ever read (totaling some 1500 pages), it's simultaneously a fast read.  You can absolutely tell that Dumas wrote in installments: each chapter ends with a cliff-hanger, which makes it pretty much always a challenge to put the book down. 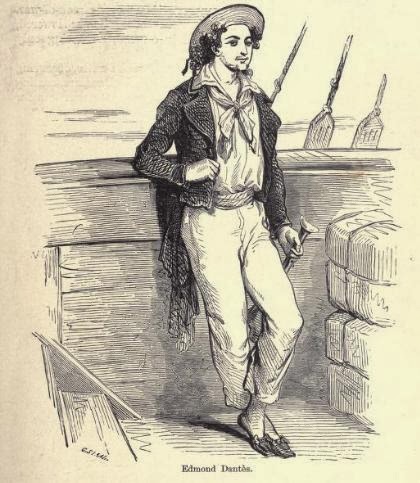 The book grapples mainly with the ideas of revenge, justice, mercy, and forgiveness.

At the exact moment that everything is going exceedingly well in his life, Edmond Dantes finds himself inexplicably thrown into prison.  He later learns that he has been betrayed by three men (one who envies Dantes' professional advancement, one who seeks Dantes' betrothed, and one who goes along with the plan due to his state of intoxication) and unjustly treated by the chief prosecutor, who uses Dantes as a scapegoat to preserve his own career and power.

After 14 longs years in a dark prison cell--kept alive by his friendship with another inmate, who shares with Dantes his vast wisdom & knowledge, including the details of secret treasure buried on the nearby island of Monte Cristo--Dantes is finally able to escape.  By hiding himself in the burial sack meant for another prisoner, Dantes leaves the prison and, as he is assumed for dead, is thrown into the sea.

This harrowing escape is Dantes' "baptism" from an innocent and joyful youth who assumes the best of others to a vindictive, determined man bent on executing God's justice upon his enemies.  This transformation is accompanied by a change of name, as the protagonist takes the new title of the "Count of Monte Cristo."  Monte Cristo is an island off the coast of Italy and the place where Dantes finds his treasure.  The word itself means "Mount of Christ."  Accordingly, ruling from the judgment seat of God, well-supplied by his extensive knowledge & vast wealth, the Count plots his revenge.


It takes ten years for the Count to arrange everything in his plan.  For, you see, it wasn't enough just to bring his enemies before the law.  No: the Count wanted to destroy them and all that they treasured, just as they had done to him.

Thus, like a chess board, the Count diligently arranges each piece, setting up the pawns just so and, when everything is in place, he lets the game begin.  The Count manipulates events to position his enemies in circumstances of great temptation, which exposes their personal greed, dishonesty, and hypocrisy.

Throughout, the Count displays almost a supernatural power. He seems able to predict the future.  No expense is beyond his budget.  His contacts are vast and numerous.  He even seems to possess a way to thwart death itself.  In short, he reads like Batman's precursor.

The Count is convinced that this power has been given to him for the good purpose of bringing about God's justice.  But "let any one who thinks that he stands take heed lest he fall" (1 Cor. 10:12).

"See...how God punishes the most thoughtless and unfeeling men for their indifference, by presenting dreadful scenes to their view.  I, who was looking on, an eager and curious spectator,--I, who was watching the working of this mournful tragedy,--I, who, like a wicked angel, was laughing at the evil men committed, protected by secrecy (a secret is easily kept by the rich and powerful), I am, in my turn, bitten by the serpent whose tortuous course I was watching, and bitten to the heart!"

What the Count comes to understand is that, while seemingly acting in the name of God, he really acts not as an angel of light, but as an angel of darkness.  Revenge becomes another enemy who threatens to destroy him: void of almost all loving emotion, he has become a driven man, bent on stripping his enemies of everything...even if such an undertaking involves sacrificing the innocent along the way.

That is the key question that drives the plot of the book: will the Count become victim again, this time to his own desire for vengeance?  Or will he realize that there is only one who can truly dispense justice...and when we seek to do so in His place, we can very easily become ourselves enemies of God?

Without providing the answer or explaining what ultimately happens to the Count's enemies, let me say that Dumas leaves his reader with two words: wait and hope.

In the face of profound injustice, wait.  Wait because there will be retribution.  There will be inevitable, unavoidable punishment.

We have hanging in one of the rooms of our house an image of Michelangelo's Last Judgment.  It's a sobering reminder that Christ the King will "come again to judge the living and the dead" (Nicene Creed).  Some of souls will rise with the angels to the throng of victors surrounding Christ.  Others will be dragged into the fiery depths of hell.

And this is where the hope comes in.  Hope for ultimate justice?  Yes, but something more as well.  Hope for redemption, for conversion, for repentance.

When one considers the punishment that awaits the soul that refuses to repent--eternal separation from God...from everything that is good and thus condemned to a state void of all love--can anyone in good conscience really wish this upon his enemy?

This is why, in fact, the Church teaches against capital punishment.  Yes, of course offenders must be justly punished and society protected from further evils from such an individual.

However, as long as there are proper facilities to retain such an individual (which we do have here in our country), capital punishment must not occur, for the specific reason that it deprives a person of the opportunity to repent.  In killing the criminal, we kill the hope that the criminal will experience remorse here on earth and seek pardon from the ultimate Judge.

May you be spared suffering at the hands of an enemy, but if you find yourself in such a situation, may you resist the temptation to seek revenge.

Forgive us our trespasses, as we have forgiven those who trespass against us.

Posted by Cassandra at 3:38 PM